Today’s Colin McEnroe Show (on 90.5 FM WNPR) was on the subject of Record Stores.
The show’s in-studio guests were Malcolm Tent (Trash American Style, Ultrabunny, WNHU Radio), Brendan Toller (Documentarian, I Need That Record), and Doug & Mary (Replay Records).  Dan (Mystic Discs) called in and so did Josh (Redscroll!) and so did a few fans of vinyl.
If you didn’t get a chance to hear it live, do not fret, it is available here:
Colin McEnroe Show 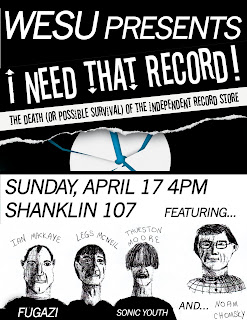