Out and About:
WESU Record Fair, Youth of Today, Salvation…
Connecticut has a lot going on this weekend. Here are three things that we will most definitely be in attendance for. 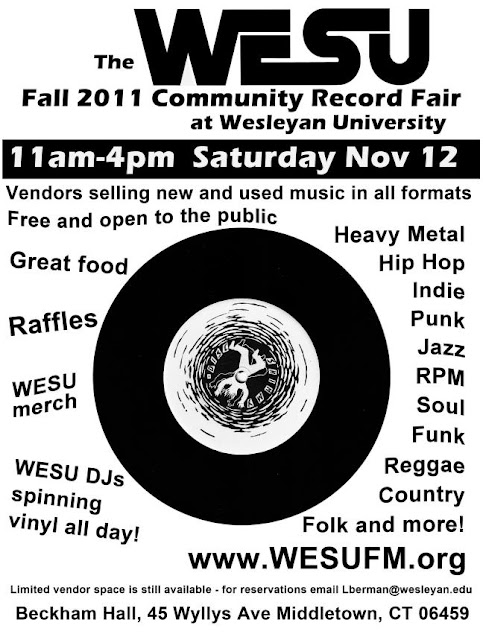 1. WESU Fall Record Fair (Facebook Event). Last year we scored a ton of great stuff for way cheap! Sean got a a copy of Botch “We Are The Romans” LP /300 for $30, that’s a steal! We’ll have a couple of tables of stuff from our store set up along with 17 other dealers.The Hartford Area Roller Derby girls will be selling baked goods as well. Get sugared up and dig hard. There will be a couple food trucks outside too. This fair is FREE. 11AM – 4PM. Saturday, November 12th Beckham Hall Wyllys Avenue, Wesleyan University Campus Middletown, CT. 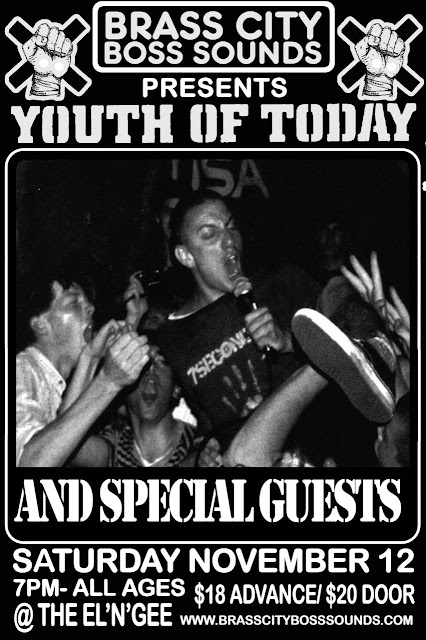 2. After the record fair, we’ll be heading down to The El’N’Gee in New London, CT to catch a performance by legendary Connecticut natives, Youth Of Today. This show is brought to us by Brass City Boss Sounds, so head over to their site and secure your ticket to move up front and shout out loud.
The last time I saw YOT was 1999. They played a reunion show in Wallingford. It was originally supposed to be at the Extreme Skatepark, but it got moved to the Polish Club down the street. I’m glad it did because the floor of the 4th floor warehouse the skatepark was in would have absolutely caved in. At that time, Jamey (Hatebreed, Stillborn, Jasta) had a small record store called Subterranean in the center of town. The day of the show, a bunch of local kids got recruited to help out. I got left at the shop by myself. No one gave me the key to take the security cases off of CDs, so I was cutting them out with pliers. People from all over the world flew in for that show and had to come to Subterranean to pick up their tickets. I have a really vivid memory of trying to explain to some nice European dudes that I couldn’t take purple money.
When I arrived at the show that night, I remember the hall was packed super tight and it felt like it took forever from the time the doors opened to when Right Brigade started that night. As soon as the feedback started in, the floor opened up wide. Dudes were moshing so hard, the floor boards were bouncing up and down and I could barely stay on my own two feet, let alone defend myself from getting hit. I made my way to the side of the stage and managed to watch the rest of the show from the speaker stacks. Youth Of Today was amazing that night. I can’t put the vibe of their set into words.
Do not miss this opportunity to catch them live!

3. Sunday brings us a night of brutal hardcore rituals by Salvation (Youth Attack), Hoax (Youth Attack) & Brass Caskets will be taking place in a secret location (Facebook Event). To be guided to the show, meet at Redscroll. We’ll show you the way.