Yes, you read that right.  Just about every year in October speculations and assertions start to be made about the best albums of that current year. That leaves a solid sixth plus (depending on when it gets posted maybe even a full quarter) of the year left!  I find it irksome.  Generally, the response to my comments from friends, colleagues, et cetera is, “It’s probably to sell albums around the holidays,” and that’s probably true to a certain (and probably large) extent.  It definitely doesn’t make it less irksome to see the amount of them that pop up.  The very idea of a best of list is pretty pompous in the first place – it’s actually impossible for any critic to listen to all of the music made in a year. The critic may argue that the filters they have in place for their music consumption lend towards their discernment or some other such rubbish.  It all just lends to further feed arrogance and self-congratulations over how great a list they’ve compiled before all of the music of the year has even been released or possibly even conceived of.

Now, I say all of that and it may seem dismissive and to some extent it probably is.  That’s a personal fight within myself, I suppose.  It would be arrogant in the other direction to completely write them off – not without merit, but still.  I read a lot of those lists for as irksome as I might find their timing I am still interested in what people find great in the world of music. A lot of them will turn me on to new music or even shine a light on something I didn’t think twice about before.

Past years I’ve written lists myself.  I’ve never felt comfortable calling them “Best Of” (I’m not alone in this as later evidence will attest to) so I just referred to them as favorites or just my list of things I’ve enjoyed – some fairly easy wording for things I liked in a particular year. I’ve also released them typically in January.  In November when a barrage of lists started being released (non-coincidentally leading up to Black Friday) I made a bit of a tongue-in-cheek comment about releasing my “Best Of Best Of Lists” in February of next year.  Well, after that comment was made and as I thought about releasing another list of favorites for myself I gave serious thought to releasing exactly what I joked about.  I became less and less interested with writing my own list and more and more interested in releasing a list of lists; which sounds like it might also take less work, but actually works out quite in the opposite way.  So, here we are.  Here’s the list of lists that I found personally best.  For all the lists included here there’s myriad that did not make the cut and will not be mentioned for a variety of reasons having to do with personal taste and practical realities (read: uninteresting, boring, redundant, etc.). Reasons why each of the lists are included are quickly stated.  A general idea of how much music off of each list I’ve actually heard is included with the top 3.  Inclusions go on.  Just read it.  You’ll get it.  These are the lists I find most meritorious.  For reasons listed to and fro and within and probably also without these are the lists I enjoyed more than all the others.  I haven’t read all the lists I might possibly enjoy, but I’m going to execute a bit of personal pompousness here (any such list has to; this is the sort of license one must take with such things and I understand it and I will continue to find it irritating).  Read this list of lists that were published as long ago as December 3rd (seems I don’t like the very earliest of them – kind of speaks for itself or maybe it doesn’t, but I certainly already addressed it at least lightly) and as soon ago as March 19th (Woah, right?!).

I’ve had this list of lists sitting in queue for most of the year and now that it’s that time of year when these are about to be published again it is perhaps now most useful (this wasn’t my original intent, but later on past March I did make this purposeful decision). Enjoy it.

Here’s the list of lists and they are in order from worst to best (bold!):

#10. Amoeba Music Amoeblog 50 Essential Albums Released in 2012
Woah, a competitor? Right off the bat?! Yea, well, they present a solid list of releases year in and year out.

#9. FACT: The 50 Best Albums Of 2012
Another solid list with a nice diverse cross-section of music. I will say I’m not a fan of this site’s (and any other site that also does the same) tactic to get more click-throughs by spreading the list over 51 pages – quality list all the same. Generally, if there is anything on this list I hadn’t yet checked out this list is a good indicator that I should.

#8. eMusic Archives: Lists
This site is actually good throughout the year for lists (good meaning that they’re consistent with them only). I personally don’t really care for many of them throughout the year, but when it comes to year’s end they do present a nice variety – very good as a resource if nothing else.

#7. Beats Per Minute: 2012 The Year In Music
Here’s another that I find a great resource. Generally, when looking at this one I will lightly scan the personal lists and pay more heed to the “Top” lists which are broken down into many categories themselves. Again, a nice resource to find albums I may have missed. Of course, finding albums which cross over all these lists is a pretty good indicator that it is worth checking out as well.
#6. PopMatters Picks: The Best Music of 2012
This is another online magazine with many many categories. I find the categories here a bit more utilitarian than others which I find appealing. A very helpful resource. I am saying the same about a lot of these. It’s just subjectively my opinion this one is better than the previous four.

#5. Best of the Bloglin 2012: The Top 50 Albums/Releases
The great thing about the Mishka NYC blog is that it very much puts what it wants on it and ignores all other published lists. Sure, there is cross-over titles, but this list always has overlooked and often otherwise panned titles not lauded elsewhere.

#4. The Quietus Albums Of The Year 2012
I personally enjoy the Quietus all year round and it tends to cater to the more left of center releases in the world. As a person that generally dwells in the left of center world (read: weirdo) this appeals to me greatly. 75 releases that appeal specifically to me? Yes please. 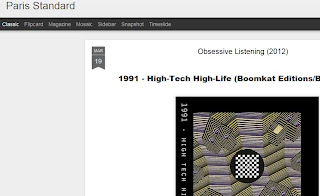 Here’s the list that was published in March (the 19th in fact). Full disclosure: the author shops here. Further disclosure: I prodded the author into making a list for 2012 after I hadn’t seen that he’d done one. I had seen his lists in years past and enjoyed them so I wanted one for this past year too. Guess what? I wasn’t disappointed. These are in alphabetic order and there are no particular number of them – just the amount that were enjoyed to an obsessive degree. There aren’t wordy write-ups – in fact the write ups are quite succinct. I’ve heard about 90% of this list which really piques my curiosity for that last 10%. Another reason this list ranks so high is because I’m totally biased towards a customer. Please tell me about any lists you (the reader) might do in the future and I’ll totally read them (this is totally proof of that). I won’t promise to love them as much as this one, but I will be honest if you ask me to. This one in particular is right up my alley (see: 90%), but beyond that I believe it to be a very open minded and cross-genre (ignoring it as much as anyone can – I’d be hard to convince that anyone could in the modern first world) non-specific in the best possible way (please do ask for what the worst possible way might be – I could run an internet search and find any number of them; please don’t actually do that).
#2.  20 Jazz Funk Greats Best Of 2012 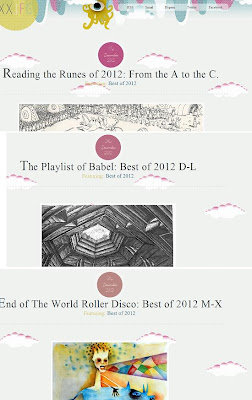 Anarchy! This list is split up into three parts (1, 2, 3) and it’s arranged alphabetically and not by some numerical ranking. OK, it’s not quite anarchy, but it’s a bit of a nose in the air to anyone doing it any other way (like me with this list). There is a bit of anarchy in there though – it’s not about strictly music releases. There’s a video game in the mix, television shows and movies (sometimes in reference to the soundtrack and sometimes not so much). As with all posts on this site it reads from a creative angle; a site with a name inspired by Throbbing Gristle makes sense having an approach that is unconventional.  It is the unconventional creative approach that speaks to me specifically. While most lists are purely academic and read like homework assignments (Oh hell, does this list read that way?! I am ill at ease right now.), 20 Jazz Funk Greats just goes free-jazz all over the idea of a “Best Of” list. Among other endearing qualities of this/these list(s) is that the format of the release and the state of its release (whether it’s actually been released or in a state of limbo) is all moot.  If it’s something that has been experienced in 2012 it is fair game.

I’ve heard or experienced (again, not everything here is an album to listen to) about 50% of this/these list(s) and that leaves some work for me to do; the kind of work I enjoy. Of the 50% I’ve heard or experienced on this list I can say that I really truly enjoyed them. The soundtracks by Black Rain, Broadcast and Hans Zimmer were all played in the shop and in my personal time many times (and left off of 99% of the lists I looked at).
#1. The Village Voice Pazz And Jop Albums 2012 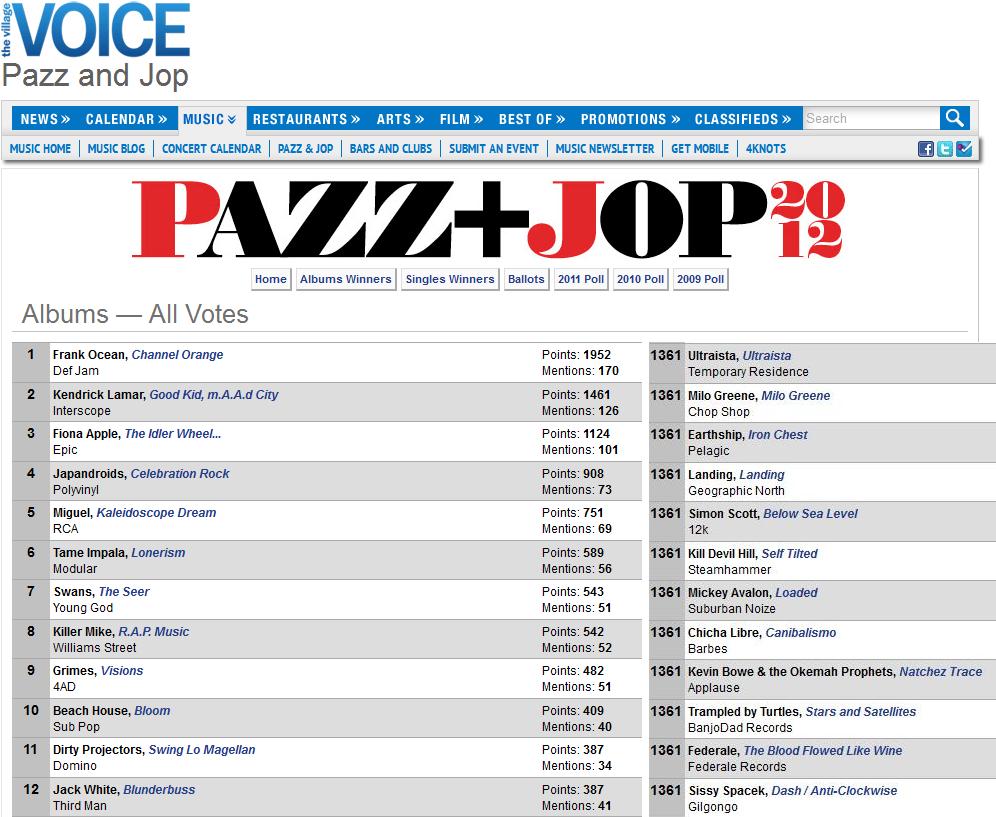 This choice was easy. It is almost completely logic based. This is simply a poll of critics, a long list of critics, a list that is listed here. It is mathematically tabulated (notes from the tabulator here). It is easily the most diverse list with 1361 spots and a ridiculous amount of titles (so many ties amongst them that I cannot easily decipher the total; note a portion pictured above of all the ones tied for spot number 1361). I specifically enjoy the Album chart and not the Singles chart. Both are worth a browse for sure, but it is much more interesting to see how full works rank in my opinion. There’s easily more on this list that I’ve not heard (either in full or at all) than I have heard; some deliberately and some because I just haven’t yet for one reason or another. This list will surely make you realize just how much music is out there and if this list is just the favorites of these critics (yes, a lot of critics, but not nearly a great percentage of them in the grand scheme) then imagine how big the iceberg is; tip of the iceberg.  Sometimes it feels good to realize the hugeness of it all and what a small role you (and these critics and artists) play.  Thanks to Pazz and Jop I am reminded annually that I absolutely cannot listen to everything that is out there and that’s totally fine.  Looking at this list conversely also reminds me that I have done well to listen to as much as I have; more than I knew existed half a lifetime ago.