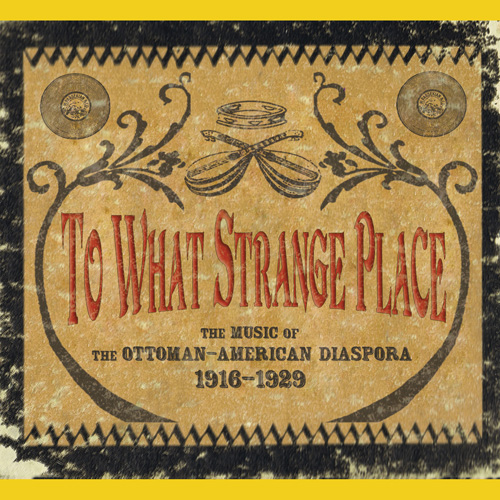 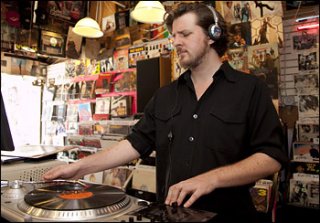 Ian Nagoski will play 78 rpm records and lecture on the history of the music, musicians and record labels documented in the beautiful new 3CD set he complied:
To What Strange Place : The Music of the Ottoman-American Diaspora, 1916 – 1929

Before the Golden Age of Americana on Record, immigrants from the
dissolving Ottoman Empire were singing their joys and sorrows to disc
in New York City. The virtuosic musicians from Anatolia, the Eastern
Mediterranean, and the Levant living in the U.S. who recorded between
WWI and the Depression are presented here across two discs, along with
a third disc of masterpieces they imported as memories on
shellac-and-stone. The intermingled lives and musics of Christians,
Jews, and Muslims represent Middle Eastern culture as it existed
within the U.S. a century ago.
A fascinating, new view of American Folk Music.
Designed by Susan Archie.
83-second Trailer :
http://www.youtube.com/watch?v=jVezxmzZFws
10-minute Featurette:
http://www.youtube.com/watch?v=EmmN4mC2gfk

BIO:
Ian Nagoski is music researcher, musician, writer and record producer.
His avocation is inspiring people who love music to love it more. In
2007 Ian released Black Mirror, a collection of gripping folk and
devotional music recorded between 1918 and 1954 in Syria, Bali,
Scotland, Yugoslavia, Cameroon, and a dozen or so other countries. It
was released on Grammy-winning label Dust-to-Digital; taste-makers
Pitchfork gave it an 8.6 and Baltimore’s City Paper called it
“enigmatic, transfixing, haunting, pretty, and just plain odd,” and
the Kronos Quartet (whose David Harrington called it the Record of the
Year in the UK paper the Independent began performing a piece from it.
The academic journal Ethnomusicology lauded it as an exceptional
collection, despite having been made for the general public.

Nagoski followed Black Mirror with two more international collections
A String of Pearls, Brass Pins & Match Heads for his own Canary
imprint (manufactured and distributed by the Porland, OR label
Mississippi Records) as well as an LP of the under-recognized and
brilliant 1920s Greek singer Marika Papagika, which LA Times Music
Editor Randall Roberts has called “awe-inspiring.” and an LP of the
mid-30s recordings of the Indian classical singer Abdul Karim Khan
which Aquarius Records named the record of the week in August, ’11,
saying it was “something else altogether […], dense, lush, emotional
and spiritual ragas, haunting and mystical and completely
gorgeous.[…], so powerful and so passionate […] you’ll be whisked
away, totally transported, as the sounds surround you, and seep into
your spirit and soul. The music here so utterly transcendent, so lush,
warm and welcoming, yet at the same time, so strange and wondrous,
Khan’s voice sounding like its bathed in divine light. Incredible.”

Nagoski is also a writer, who has contributed to dozens of magazines
and blogs, and he is the writer and host of Fonotopia, a radio show
based around his obsession with early 20th century recordings, which
David Srebnik, the Music Format Curator at the Public Radio Exchange
has called “a deeply rich hour of music and compelling storytelling,”
noting that Nagoski has “not gathered any collector-nerd moss along
the way.” Over the past several years, he has traveled widely as a
teacher and lecturer, moving between galleries, bars, coffee houses,
sound-art festivals, radio.

He is the recipient of a Kindle Foundation award, which has made this
tour possible.

REVIEWS OF TO WHAT STRANGE PLACE:

8.3 “It feels as essential to an understanding of American music as
anything else.”
– Pitchfork

4.5/5 “a beautiful and labyrinthine Americana, one that stretches
confines of the definition of the word itself. It is an essential
document for collectors of world music, but also for those interested
in the unsung personas that created 20th century America.”
– AllMusic

“Comparisons with Harry Smith’s anthology or Revenant’s American
Primitive are in order, not least because this is American music with
a capital A, animated by the same feelings of desperation, nostalgia,
the quest for cheap kicks and the agony of loss. Like Smith, Nagoski
is a Walter Benjamin visionary, using his collection of 78s to
hallucinate a history that actually happened but which remains hidden
beneath official dogma and nationalisms.”
-The Wire, August 2011. 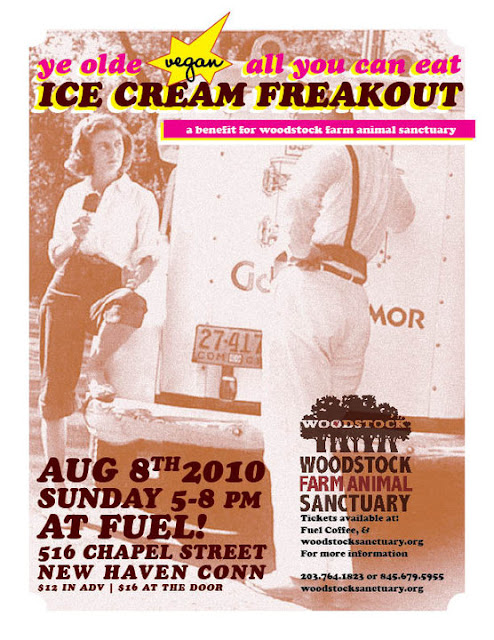 Tomorrow night (Sunday, August 8th) at Fuel Coffee Shop (516 Chapel
Street New Haven, CT 06511-7402) there will be an all-you-can-eat
vegan ice cream social. It’s hosted by Connecticut’s best vegan bakers, Little
Vegan Monsters as a benefit for the Woodstock Farm Animal Sanctuary. If you’re not familiar with the sanctuary, they basically rescue farm animals that would’ve been slaughtered as
food or that were neglected by previous owners. The frozen treats are being
donated by So Delicious and will be served alongside some home made
flavors! There will be tons upon tons of toppings too. Come pig out for this
great cause. Also, Rick (y’know, of Redscroll Records) & Brian Frenette will
be spinning fun summer jams to set the mood! 5-8PM. $16.