This update includes the Black Friday items first and then a regular stock update following that. Regarding Black Friday Record Store Day Items:
As much as we’d like to have every possible thing on hand in quantities exactly matching the demand it just can’t work that way. We order a tremendous amount as do many other stores. We are allocated certain amounts of things and ultimately we get a lot because we put in the leg work. That said, we get less than we order and in some cases we miss out on items completely (trust us, it’s not purposeful by any stretch). We’ll also invariably get some things late; we’ll do our best to let everyone know using our social medias about those. We want everyone to be happy in the end so be excellent to each other.

Parking can be an issue as well. If you’re parking in our lot please leave the spaces against the building empty (for the other stores and employees). If your bumper is up against a wall you’re in the wrong spot, basically.  Plenty of parking exists across the lot and in adjacent lots.  Here’s a quick map (there won’t be food trucks so you can also park in that area – this map is from April’s RSD event): We put a quick Instagram video together about the orientation of the store on Friday (if you’ve been here on any of our previous big events you’ll recognize it. Enter through the back. Exit out  the front.):
https://www.instagram.com/p/-hcQWvCDEw/?taken-by=redscroll

END_OF_DOCUMENT_TOKEN_TO_BE_REPLACED Fun end of the year bonus for you! Come in and spend $50 or more (Gift Certificates count!) and we’ll give you a free shirt (while they last)! 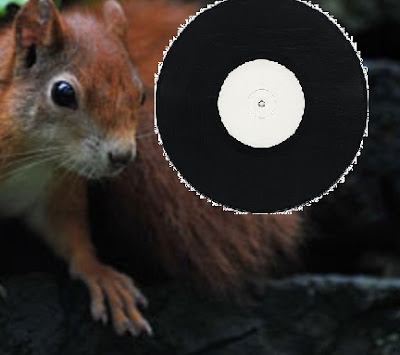 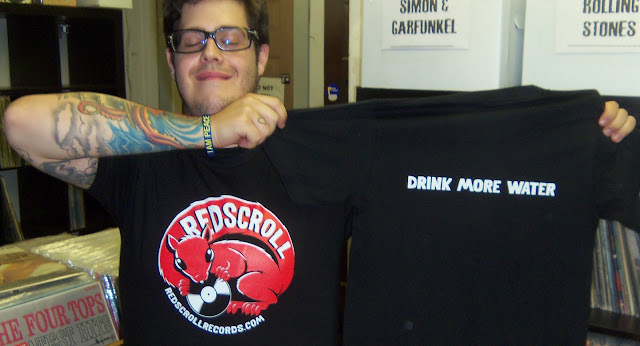 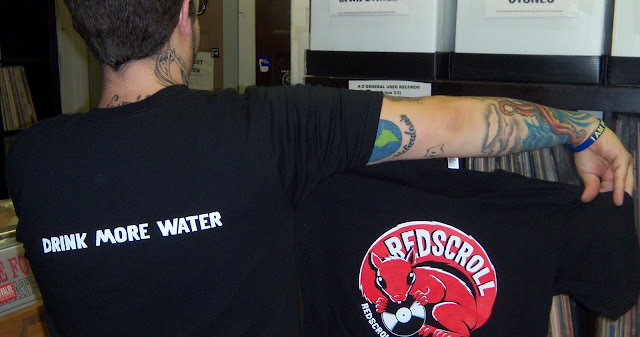 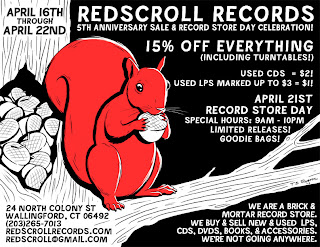 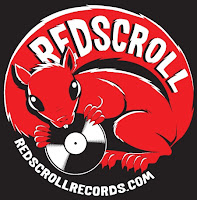 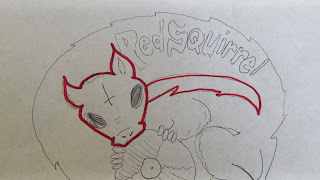 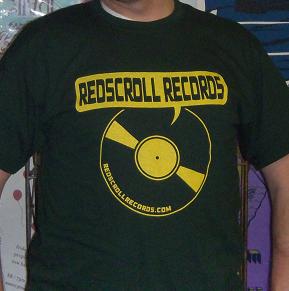 As stated on the flyer for the sale if you spend $100 you get one of these for free (or the symbol design we did earlier this year).  This new simple design was requested by more than a handful of people so I hope you all like it.  We think it came out pretty great.  It’s the basic idea from our first square bumper sticker. 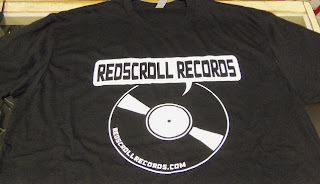 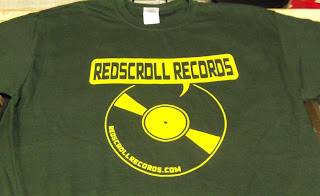 If you don’t spend $100 or more at the sale you can still get them for $10.
Oh yea, and we have some pins that we made up that are free for everyone that comes into the store next weekend for the sale.
Here’s what those look like: 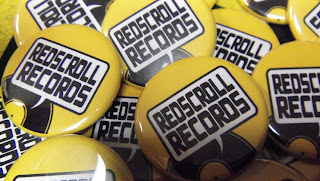 Thanks to Shogun for doing a great job on the shirts and Just Buttons for the outstanding buttons. As per usual Todd Rogers did a great job designing all of this too (as well as the Blackout Sale flyer). Thanks abounding.
We have a new sticker design.  That design is also on shirts and hoodies.

The above image is the sticker design – the shirt and hoodie are basically the same, but do not have the tag line and web address.  Pictures to follow. 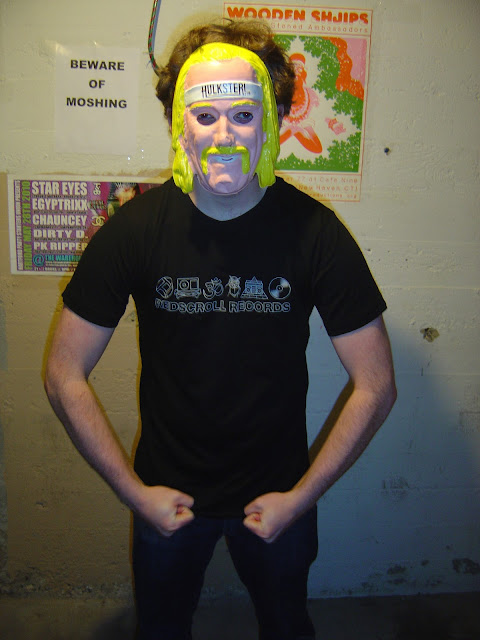 The T-Shirts are white ink on black Alternative Apparel Vintage Soft (100% Egyptian Cotton).  They are incredibly soft – softer even than the American Apparel shirts we’ve had in the past.  Seriously.  Soft.  Comfortable.  We have adult sizes Small-XXL.  They are $12 each in store.

The pull-over hoodies are also white on black.  They are on Gildan 50/50 (half cotton, half polyester).  They are also pretty darn soft for a hoodie.  They are warm and nice.  We have these also in adult sizes Small-XXL.  These are $25 each in store.  Shogun Shop did the screening on all of these (The T’s and the Hoodies) and they came out great.

Once again we had Contagious Graphics print stickers for us (if you ever use them please use us as a reference).  They are sweet vinyl stickers and are free at the shop (if you order anything from us ask for one and we’ll stick it in with your order).

If you want to mail order these please do.  Ordering buttons below these handsomely modeled pictures below. 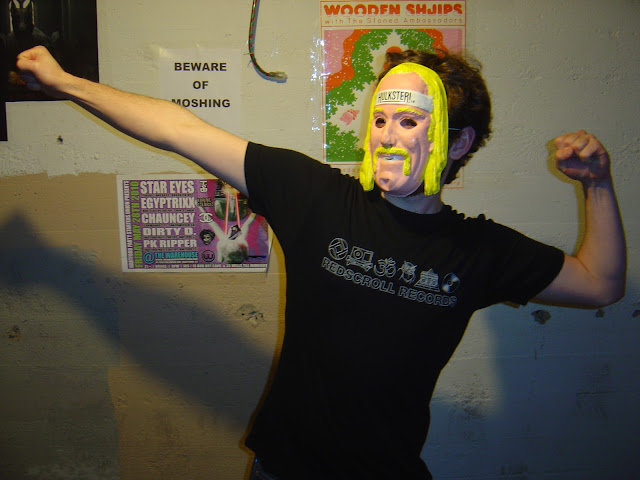 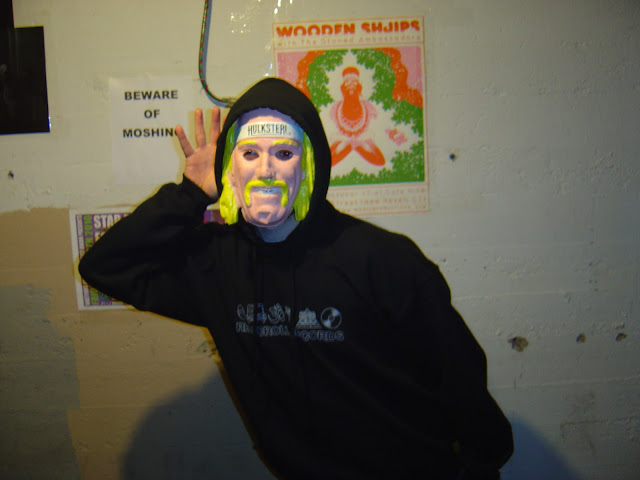 Finally, if you are wondering the significance of all these icons or runes, well, I’ll give you an idea right now.  First of all, this was inspired by and is a tribute to one of my favorite record labels – one that uses a series of runes above their name (ask me [Rick] and I’ll tell you right off the bat – guess and I’ll give you a free sticker [yes, they are free anyway – jokes]).  Todd Rogers (Teaessare Design) once again made our vision a reality.  He is the best and if you need some design work we definitely recommend him.

All right, the breakdown from left to right (furthest left being #1 and furthest right being #6). 1. Josh loves Integrity – this is a rune often used by Dwid (Integrity).  That’s about as simple as that.  2. File sharing kills music symbol.  This symbol is a take on the home-taping is killing music of the ’80s.  It’s a bit tongue-in-cheek, actually.  It’s a ridiculous notion to take at face value, but the imagery speaks to our business just the same.  We don’t sell files.  3. This is the Om symbol.  Music is meditative.  Mantra, take me home I trust you (Shelter lyrics).  4.  You might and maybe should recognize this owl from our fliers and previous shirt design (double thanks to Todd Rogers for this).  5.  I (Rick) love KLF – this is a two dimensional take on the three dimensional Justified Ancients of Mu Mu symbol.  6. This is a record.  You know that.  We sell ’em.  We love ’em.

Of course, you can just take these at face value too. Make up a story of your own.  We don’t mind.  #1 is representative of Robert Johnson and the crossroads and the very roots of rock and roll.  #2 is a robot with a patch over it’s left eye.  #3 is the ancient rune for happiness.  #4 is the image of the owl from the original Clash of the Titans movie.  #5 is King Tut’s original design for his final resting place – he actually designed the first boom box centuries before they existed (nothing new for them crazy Egyptians – also the reason we used the Egyptian cotton shirts). #6 is still a CD that looks a lot like a record.  We sell ’em.  We love ’em.