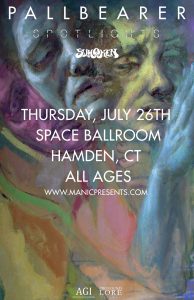 We’ve got a great weekend of shows coming up! Kicking it off TONIGHT at Space Ballroom is Arkansas doom metal group Pallbearer, followed by WOLF!(feat. Scott Metzger of Joe Russo’s Almost Dead) on Friday. Feel the summer heat this Saturday with Summer Salt who are selling out tour dates across the country! Our weekly Manic Mondays feature at Cafe Nine this week is Brent Cowles, fresh off tour with Nathaniel Rateliff & The Night Sweats. For more information, shows we’ve just announced and a special giveaway check out the rest of the blog!

Interested in winning a pair of free tickets to see Franz Ferdinand August 8th at College Street Music Hall? Test your history knowledge with a trivia question in the Google Form below for your chance to win!

INFO: Pallbearer emerged from Little Rock, Arkansas in 2012 with a stunning debut full-length, Sorrow and Extinction. Pallbearer possessed what many other newer metal groups didn’t: perfect guitar tone, classic hooks, and a singer who could actually sing. Pallbearer make the kind of heavy rock (the heavy moments are *heavy*) that will appeal to diehards, but could also find the group crossing over into newer territories and fanbases. After having helped revitalize doom metal, it almost feels like they’ve gone and set their sights on rock and roll itself.

INFO: Taking their cues from a soul, blues, boogaloo, country and rock background, Wolf! seamlessly merge styles to create a party where everyone’s welcome…one that you don’t want to miss! This Brooklyn-based trio continue to find new and exciting ways to evolve and push what’s possible with the classic guitar, bass, and drums formula while maintaining a fundamental groove that’s both irresistible and undeniable. Wolf! strives to make great music, and life is too short to listen to bad music.

INFO: Newly signed to Epitaph Records with a new album in the works Summer Salt is a band best pals. With influences of bossa nova and oldies, they create the perfect soundtrack for chillaxin’ by the pool. Matt and MJ have the voice of angels, Eugene has that in-the-pocket drummin’ and Phil’s bass is funny.

INFO: Growing up, Cowles first discovered the power of his voice singing hymns at his father’s church in Colorado Springs. Having a pastor for a parent meant heavy involvement in religious life, but Cowles never quite seemed to fit in. At 16 he fell in love with secular music; at 17 he recorded his first proper demos in a friend’s basement; at 18 he was married; at 19 he was divorced. Blurring the lines between boisterous indie rock, groovy R&B, and contemplative folk, the music showcases both Cowles’ infectious sense of melody and his stunning vocals, which seem to swing effortlessly from quavering intimacy to a soulful roar as they soar atop his exuberant, explosive arrangements.

INFO: Love and Protest: two concepts that seldom go hand in hand. Until you think about it a while. Nothing could be better news for those who have loved Girls Guns & Glory. Nothing can give more hope to all still waiting for their faith in real, honest-to-God American music to be restored.

INFO: George Porter, Jr. is best known as the bassist of The Meters, Porter is also the band leader of his own unique long term project the Runnin’ Pardners, well respected not only as a quintessential New Orleans band, the touring band continues to receive accolades on the jam band and festival scene. He has assembled some seasoned and talented musicians to join him on this project. Porter has proven to be capable of the ultimate fusion of rock, funk and R&B, and has gained recognition as one of the industry’s elite bass players. He continues to be not only an in demand performing artist but an accomplished studio musician and producer. Today, Porter features that epic bottom end in his latest ventures with his own band the Runnin’ Pardners.

INFO: How does a band keep evolving and moving forward after 15 years? First up, embrace the modern age and the way that people are consuming music these days. “I don’t like it, but the long play album format is probably dead,” says Mates of State singer/drummer Jason Hammel. “Now we just want the hits. Don’t bother me with filler; get me your best songs straightaway.” Rather than lamenting this shift in listening preferences, Hammel and his bandmate Kori Gardner are taking a very KISS-like approach with their new music: you wanted the best, you got the best. After a decade and an half of acclaimed albums and live performances, and songs that have become near pop standards for a generation of music fans, it’s good to know that Mates of State isn’t content with coasting. Hammel and Gardner are working as hard as ever and looking excitedly toward what the future has to offer.

INFO: “We write and record songs. Then we release them. Then we play those songs to people.” 10 years after the release of their debut album “Animals”, TTNG takes the songs that kickstarted their career on the road once again. The band spent time collaborating with original vocalist Stuart Smith to re-work the album’s tracks for its new performance. TTNG will be performing the album “Animals” in its entirety at Space Ballroom Stuart Smith as well. Along with the tour the band is releasing a special acoustic version of “Animals”!

INFO: Low Cut Connie has firmly established their reputation as one of the most exciting live shows in the US. On their 5th studio album Dirty Pictures (Part 2), released via Contender Records, the band urges all current and former youths: Feel your feelings. Feel sadness, feel love, feel wildness. Give your feelings away to others and maybe it will lift us up. It’s this musical and emotional literacy that sets the band apart, with their world-weary but life-affirming attitude that inspires their cult following and notable cheerleaders such as Barack Obama, Sir Elton John, Howard Stern. With more than 120 shows per year, including stops at festivals like Bonnaroo, Bottle Rock, Rock The Garden, Pickathon, Newport Folk Festival and more, this little act from Philly continues to dig in their corner of the sandbox. Low Cut Connie light a fire at every show and with every record. Dirty Pictures (part 2) reminds all of us, all the little people, to keep our fires lit at any cost.

INFO: It’s funny, trying to find words to describe music, isn’t it, because the point of music is that it’s something other than words. Music, at its best, is something better, hanging out in a mystery dimension with its cool friends, sex and drugs, each of them outdoing each other with their refusal to be reduced into sentences. But we will try to describe it anyways. The Blow is Khaela Maricich and Melissa Dyne, the sonic field is an endless grid of possibilities. Using electronic instruments makes the options even more limitless.

INFO: It’s rare for an artist to bridge the divide between critical acclaim and dedicated fan engagement. Chris Pureka is a Portland-based singer-songwriter whose body of work has resonated deeply with these seemingly disparate milieus. Her bold vulnerability in processing the intimacies of her life in song has long appealed to those listeners who crave authenticity. Chris’s elegant emotionality as a vocalist, and her flair and immediacy as a lyricist have garnered her favorable comparisons to Gillian Welch, Ryan Adams, Bruce Springsteen, and Patty Griffin. She’s earned accolades from such distinguished taste-making outlets as The New York Times, Paste, Magnet, Billboard.com, and The AllMusic Guide. “My music is the outward expression of the work I’m doing internally. What I do comes from my experiences, and I strive to express these experiences authentically. Speaking my truth, and being myself, is the way that I connect with people,” Chris confides. Her rise as an esteemed artist with captivating emotional integrity has been organic and always on her own terms. For someone who never had an intention of being a professional musician, it’s been a life of far-reaching changes and unexpected rewards.