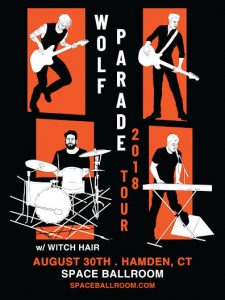 As usual, we have a bunch of exciting show announcements this week! Coming up at Space Ballroom we have New Jersey indie punk rockers, Titus Andronicus (10/12); Polyvinyl sweethearts and Airhead enthusiasts, The Dodos with Palehound (11/3); and emo-tinged/post-hardcore Nebraskan indie rockers, Cursive with Meat Wave and Campdogzz (11/9).

Canadian indie rockers, Wolf Parade will be stopping at Space Ballroom on Friday, August 30th for an intimate and exclusive performance as a part of their almost totally sold out tour. Enter for the chance to win a pair of tickets, poster, and CD copy of their latest album, “Cry Cry Cry” 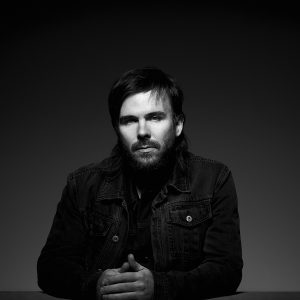 Toby Driver (of Kayo Dot) will performing on Monday, October 22nd at Cafe Nine as a part of our Manic Monday series. Driver is a very busy man with his multitude of projects including Kayo Dot and we are lucky for the chance to hear some of his more dark, austere neofolk work. RSVP below for this unique and thrilling performance. 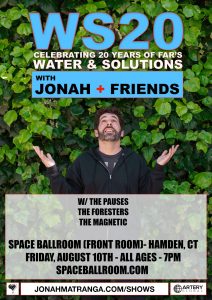 INFO: Jonah Matranga (aka onelinedrawing) is essentially unique. His sound and style is somewhere in between Prince, Bjork and The Clash, but it doesn’t really fit into any genre. Over the last 20 years, he’s fronted influential post-hardcore band Far, along with lots else (onelinedrawing, New End Original, Gratitude). Jonah has played with, collaborated with, and influenced artists from Frank Turner to Kimya Dawson to Deftones to Sepultura to Lupe Fiasco… and lots more. He will be celebrating 20 years of FAR’s album Water & Solutions in the Front Room at Space Ballroom. You don’t want to miss this special intimate show!GET TICKETS HERE: https://ticketf.ly/2LtTXjx 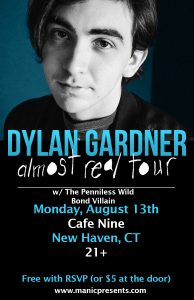 INFO: With an encyclopedic musical knowledge that could power a streaming service search engine, fashion sense right at home in Scott Pilgrim Vs. The World, and the uncanny superpower to craft irresistible pop anthems, Dylan Gardner, the 21-year-old singer, multi-instrumentalist, and producer is about to make a big splash on his sophomore album Almost Real. His enthusiasm for the pop-album experience and the wonders of songwriting are what illuminate Dylan’s spirit and makes his songs so special. He’s inviting everyone along for the ride with Almost Real.
RSVP HERE: https://ticketf.ly/2JNoEUt 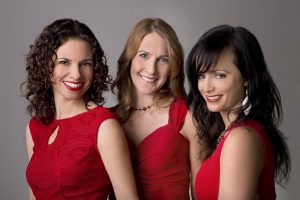 INFO: The Americana sweethearts who took a break in 2015 to work on their solo recordings are back for a limited number of shows in 2017-18. These very special shows feature picks from each of their 2017 solo projects, arranged in the signature Red Molly style as well as Red Mollyfavorites that span their 11-year career. A new line up includes Eben Pariser (Roosevelt Dime) on electric guitar and drums and Craig Akin (Roosevelt Dime) on upright bass.Known for their gorgeous harmonies, infectious songwriting, and captivating stage presence, Red Molly (Laurie MacAllister, Abbie Gardner and Molly Venter) weaves together the threads of American music—from folk roots to bluegrass, from heartbreaking ballads to barn-burning honky tonk—as effortlessly as they blend their caramel voices into their signature crystalline, three-part harmonies. Their brilliantly wrought a capella tunes are love letters to the art of the vocal blend, and their innovative instrumentation is perfectly suited for foot stomping bluegrass-tinged barnburners and heart-full ballads alike. Red Molly is simply a joy to listen to.
TICKETS ON SALE NOW: https://ticketf.ly/2OXaKOf 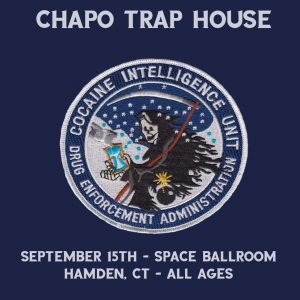 INFO: Chapo Trap House is one of the fastest growing political entertainment podcasts in thecountry. The New Yorker describes Chapo as “[fighting] for irony in the age of Trump,” while Paste magazine called its hosts “the vulgar, brilliant demigods of the new progressive left.” Mediaite profiled it as “The Funniest and Most F**ked Up New Podcast About Media and Politics.” They have an extremely committed fanbase, and are the largest channel on Patreon with over 20,000 monthly paying subscribers.
TICKETS ON SALE FRI. 8/10 @ 10AM: https://ticketf.ly/2Ku7eYd 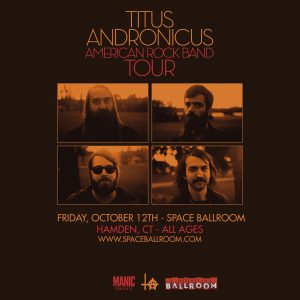 INFO: Since debuting in 2008, Titus Andronicus has been conditioning faithful listeners to always expect only the unexpected, consistently zigging where others would zag and maintaining a steadfast dedication to fearless ambition. With the March 2 release of the new studio album A Productive Cough on Merge Records, Titus Andronicus has executed the most shocking departure yet—but only if, as ever mercurial singer-songwriter Patrick Stickles insists, “you haven’t been paying attention.”
TICKETS ON SALE FRI. 8/10 @ 10AM: https://ticketf.ly/2OQp3nW 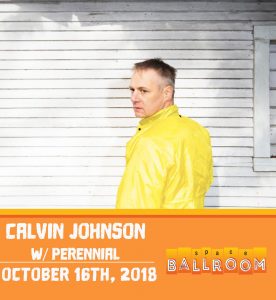 INFO: Calvin Johnson established K Records in 1982 and founded Dub Narcotic Studio in 1993. He has performed with groups such as Beat Happening, The Go Team, Halo Benders, Dub Narcotic Sounds System, and The Hive Dwellers. He tours as a solo artist, and also performs as Selector Dub Narcotic.
TICKETS ON SALE FRI. 8/10 @ 10AM: https://ticketf.ly/2B11vdg

INFO: Toby Driver is best known as the frontman and bandleader of the prolific experimental band, Kayo Dot (ex-maudlin of the Well). In the past two decades, he has masterfully explored the limitlessness of music, from weird metal to beautiful post-rock, from austere ballads to tripped-out 70s fusion and beyond. Throughout his many projects, his solo works, and most of all Kayo Dot, Driver’s adventurousness shines brightly. Whereas most musicians attach an identity to themselves in terms of scene or style, Driver’s music is the sound of the abandonment of identity, and the refusal to answer the question “Who are you?” Paradoxically, perhaps his defining characteristic as a composer and musician is this fearlessness of looking into the unknown.
RSVP HERE: https://ticketf.ly/2ALDbM1 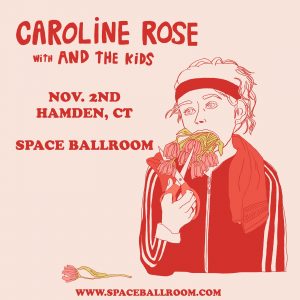 INFO: An obsession with money, an unfaithful lover, a friend’s accidental pregnancy, misogyny, loneliness, death… This is just some of the lighthearted subject matter that make up LONER––the darkly comedic second album from songwriter/producer Caroline Rose. Armed with an arsenal of new instruments and equipment, an ever-growing sense of “ahhh fuck it,” two years of exploration, and a wicked sense of humor, Rose delivers a set of serious songs wrapped in a sprightly, angsty pop burrito. Because, as Rose puts it, “Sometimes sad songs just need a cocktail.”
TICKETS ON SALE NOW: https://ticketf.ly/2APYpZl 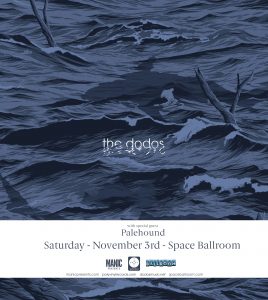 INFO: Originally formed in 2006 as Dodobird by multi-instrumentalist Meric Long, unpredictable San Francisco indie rock duo the Dodos acquired their new moniker with the arrival of Logan Kroeber, a fellow West Coast artist whose penchant for experimental drumming and progressive metal melded perfectly with Long‘s interest in West African Ewe drumming and country blues fingerpicking. The Dodosindependently released their debut album, Beware of the Maniacs, that same year, followed by Visiter in 2008. Longand Kroeber added electric vibraphonist Keaton Snyder to the fold and collaborated with producer Phil Ek on 2009’s Time to Die, which found the trio exploring a more fleshed-out sound. For 2011’s No Color, the band recruited Neko Case as a supporting vocalist and returned to its Visiter-era approach. The following year they were left in shock by the news of the sudden death of touring member Chris Reimer (also of Canadian outfit Women), who passed away in his sleep. This led Long and Kroeber to reassess the entire band, and for Long in particular, the way he approached songwriting and his guitar work. Their fifth record, Carrier, was released in 2013. Two years later, the band returned with Individ, a set of songs recorded shortly after Carrier that focused on Visiter-like interplay between Long and Kroeber.
TICKETS ON SALE FRI. 8/10 @ 10AM: https://ticketf.ly/2OR3vYf 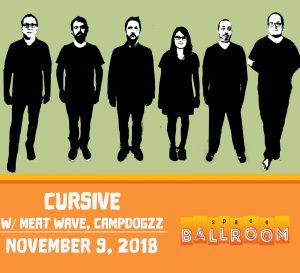 INFO: Over the past two decades, Cursive has become known for writing smart, tightly woven concept albums where frontman Tim Kasher turns his unflinching gaze on specific, oftentimes challenging themes, and examines them with an incisively brutal honesty. 2000’s Domestica dealt with divorce; 2003’s The Ugly Organ tackled art, sex, and relationships; 2006’s Happy Hollow skewered organized religion; 2009’s Mama, I’m Swollen grappled with the human condition and social morality; and 2012’s I Am Gemini explored the battle between good and evil. But the band’s remarkable eighth full-length, Vitriola, required a different approach — one less rigidly themed and more responsive as the band struggles with existentialism veering towards nihilism and despair; the ways in which society, much like a writer, creates and destroys; and an oncoming dystopia that feels eerily near at hand.
TICKETS ON SALE FRI. 8/10 @ 10AM: https://ticketf.ly/2APjS4M