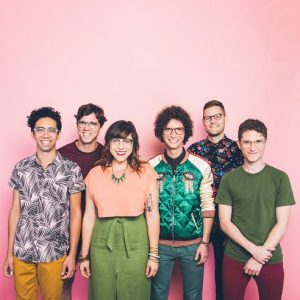 We have a great lineup of shows this week starting tonight (8/23) with New Orleans’ Sweet Crude at Space Ballroom! The six-piece band has taken the music and language of Louisiana to craft their own fresh sound. You don’t want to miss it!

This Saturday at Cafe Nine we’ve got indie garage-pop band Gringo Starr (8/25). Jumping back to Space Ballroom, Slaughter Beach, Dog (Jake Ewald of Modern Baseball) hits Hamden this Friday (8/24). Tickets are going fast for former Deep Purple bassist and singer Glenn Hughes’ show at Space Ballroom (8/26), so be sure to get yours soon!

Lucinda Williams performs two shows in CT on her upcoming “Car Wheels on a Gravel Road” 20th Anniversary Tour at College Street Music Hall in New Haven (11/9) and at the Wall Street Theater in Norwalk (11/10).

In other exciting news, the legendary Bob Dylan comes to the Palace Theater in Waterbury (11/20)! Tickets go on sale this Friday(8/24) at 10am.

Check out the rest of the blog for latest info on show announcements and upcoming shows below!

INFO: Over the past few years, Sweet Crude has managed to take the music and language of Louisiana and produce a completely fresh music that thrusts century-old traditions into the present. The six-piece band consistently delivers exciting shows featuring enough drums for a small marching band, exuberantly bellowed harmonies, and lyrics that jump from English to Louisiana French in a single verse. Boasting surnames like Marceaux and Chachere, Sweet Crude seeks to reconnect with their lineage in a way that draws on their own modern influences, while nodding to the music and language of their ancestors.
TICKETS STILL AVAILABLE: https://ticketf.ly/2KoqnzC 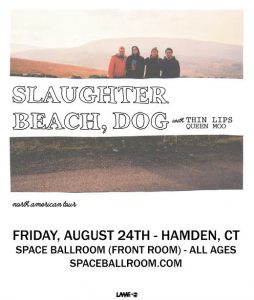 INFO: Modern Basbeball’s guitarist/singer, Jake Ewald will be performing for show at Space Ballroom. Slaughter Beach, Dog was a creative project that originated in 2015 and was a hiatus from Modern Baseball as a way to get over a writers block and get more creative with songwriting.
GET TICKETS HERE: https://ticketf.ly/2y9JTue 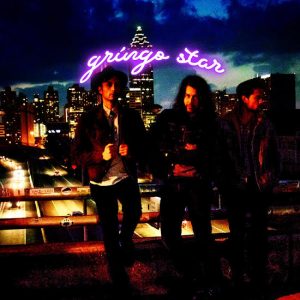 INFO: Gringo Star are an Indie Garage Pop band from Atlanta, Georgia, founded by brothers Pete and Nicholas Furgiuele, and joined in 2016 by Josh Longino (featured on the new album) and Mario Colangelo. Their 5th album “Back to the City” is coming out Aug 24, 2018 via Nevado Music, an L.A. based label (Deap Valley, Eternal Summers, Yukon Blonde). The album was produced, written, recorded and mixed at Studio 234 in Atlanta by the brothers. Gringo Star are insouciant explorers, tossing the paddles overboard and drifting on the currents of their lackadaisical curiosity across a rippling sonic ocean, out to the far edges of rock & roll.
TICKETS STILL AVAILABLE: https://ticketf.ly/2szOyjR 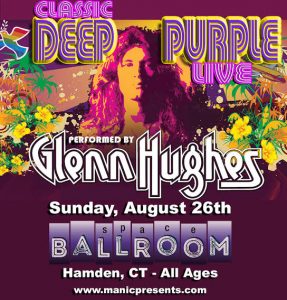 INFO: Glenn Hughes, former bassist and singer of Deep Purple, known to millions as the ‘Voice of Rock’, Rock and Roll Hall of Fame inductee, and the current front man for rock super group Black Country Communion is pleased to announce that he will be performing Deep Purple only material with his “GLENN HUGHES PERFORMS CLASSIC DEEP PURPLE LIVE” nationwide US tour in August-Sept. 2018.
TICKETS GOING FAST: https://ticketf.ly/2pTkWvp 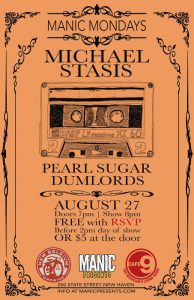 INFO: Michael Stasis is a compulsive songwriter living in Los Angeles. His entirely self-recorded output has spanned the last fifteen years and boasts a variety of odd styles borrowed from his multiple lives in the Pennsylvania woods, New York City, The Bay Area and Los Angeles. Having studied film and sound at the renowned Cooper Union in Manhattan, Stasis is primarily concerned with investigating pop motifs rather than committing to a fixed persona. While this eclectic, almost academic artistic approach has led to confusion among critics, his work is always accessible and he maintains a coveted position in the pantheon of “weirdo” songwriters.
RSVP HERE: https://ticketf.ly/2NTdpHA 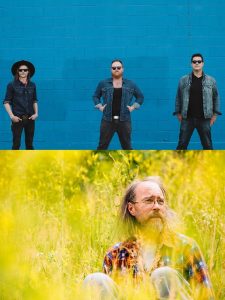 INFO: Ghost of Paul Revere and Charlie Parr are teaming up to co-headline at Space Ballroom.

Ghost of Paul Revere recently opened our show with Old Crow Medicine. The Portland, Maine-based band describes their sound as “holler folk,” not because it involves a lot of hollering, per se, but because it invokes the rich communal tradition of field hollers, with their call-and-response melodies, sing-along hooks, and densely layered harmonies.

Charlie Parr has been traveling around singing his songs ever since leaving Austin Minnesota in the 1980’s in search of Spider John Koerner, whom he found about 100 miles north at the Viking Bar one Sunday night and the experience changed his life.
TICKETS ON SALE FRI. 8/24 @ 10AM: https://ticketf.ly/2PsDu1S 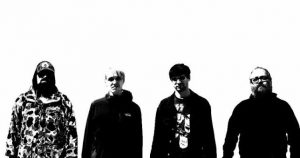 INFO: The Body have announced a full collaborative album with Uniform. In the past two years alone, The Body has joined forces with the metal bands Thou, Sandworm, and Krieg, recorded with Wrekmeister Harmonies, and collaborated with electronic producer The Haxan Cloak. They are currently working on a collaboration with The Bug and grindcore band Full of Hell. 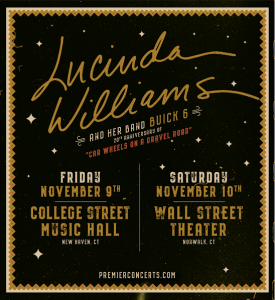 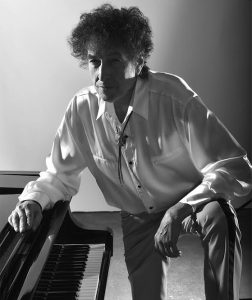 *Bob Dylan and His Band

INFO: Bob Dylan is as great a songwriter – ah, let’s not beat around the bush – as great an artist as America has produced. But he’d be the first to tell you that he is part of a long line, one link in an endless chain. You can follow his influence backward or forward according to your own inclination. Or you can spend a long time just listening to Dylan’s five decades of contributions. Wherever you go into it, and whatever you get out of it, your time will be well spent – Bill Flanagan – New York, 2007.
TICKETS ON SALE FRI. 8/24 @ 10AM: https://ticketf.ly/2Pimrzr 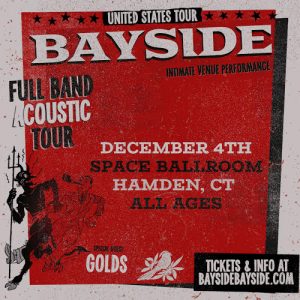 INFO: Originating in Queens and eventually establishing personal lives and careers that extend across the country, BAYSIDE became a staple of pop-punk and alt-rock world, powered by the strength of sing-a-long ready anthems that are both deeply personal and welcomingly universal. BAYSIDE represent a lifestyle, a counterculture, and a deeply held conviction, diverse in thought and background but united by a shared desire for authentic expression. It’s a spirit that permeates an impressive and storied discography.
TICKETS ON SALE FRI. 8/24 @ 10AM: https://ticketf.ly/2PmUu9z

INFO: Best known as the frontman of the influential indie rock trio Dinosaur Jr., J Mascis has also been a solo artist, producer, and film composer. Getting his start as a founding member of the hardcore band Deep Wound, Dinosaur Jr. was founded in 1984 and the group emerged among the most highly regarded in alternative rock. By reintroducing volume and attack in his songs Mascis shed the strict limitations of early 1980’s hardcore, becoming an influence on the burgeoning grunge movement.
TICKETS ON SALE FRI. 8/24 @ 10AM: https://ticketf.ly/2PeAoyr 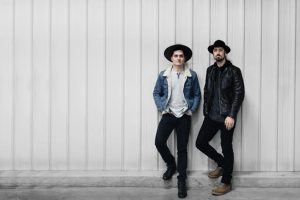 INFO: The Talbott Brothers are a Portland based duo composed of brothers Nick and Tyler Talbott. Born and raised in Imperial, a small town in Southwestern Nebraska, they began writing and performing together in the summer of 2012 before relocating to Portland, OR. Forming an alternative blend of folk, rock and blues, The Talbott Brothers creatively combine blood harmonies with storytelling and infectious melodies.
RSVP HERE: https://ticketf.ly/2Pp7BqG 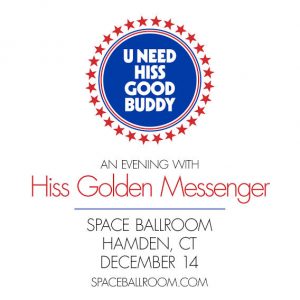 INFO: “I see the dark clouds. I was designed to see them. They’re the same clouds of fear and destruction that have darkened the world since Revelations, just different actors. But this music is for hope. That’s the only thing I want to say about it. Love is the only way out. I’ve never been afraid of the darkness; it’s just a different kind of light. And if some days that belief comes harder than others, hallelujah anyhow.” —M.C. Taylor
TICKETS ON SALE FRI. 8/24 @ 10AM: https://ticketf.ly/2wk5eg3