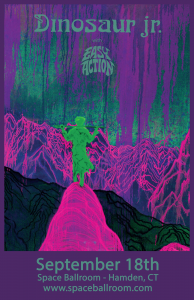 Welcome to another addition of our weekly Redscroll blog! This week’s shows kick off on (9/13) with inventive and energized jam band quartet Perpetual Groove at Space Ballroom. They will be performing new and old tunes from their eclectic discography. Local act Eggy will be opening up the show!

Reggae legend Ziggy Marley will be spreading his music and positive vibes (9/15) at College Street Music Hall along with Steel Pulse bringing  your soul much warmth and praise.

For Manic Monday (9/17) at Cafe Nine, come out to see white-hot garageband Mystic Braves performing their blended influence and sound that is unprecedented in contemporary music.

Comedian Hari Kondabolu (‘The Problem with Apu’, Netflix ‘Warn Your Relatives’) plays a special show at Space Ballroom on Sunday, October 28th! Tickets on sale Friday at 10AM.

Alternative indie/folk band Houndmouth, will perform old song and songs off their recently released album Golden Age on (11/10) at College Street Music Hall. Get your tickets at manicpresents.com!

Check out this exciting new contest for Algiers! One winner will be selected to win a pair of tickets to their upcoming show plus a signed CD and a t-shirt. The show is at the Space Ballroom (Front Room) on 9/19. Enter now!  Link to enter the contest is under the show date below.

Read below for more information! 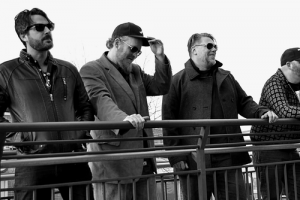 INFO: Perpetual Groove based in Athens, GA, rides an unending wave of momentum buoyed by an enthusiastic fan base and international critical acclaim. PGroove’s music has evolved into a genre-bending, highly original sound that touches upon jazz-rock, neo-psychedelia, R&B, trance electronica, progressive rock, and anthemic arena rock. Their large catalog of original music offers something for everyone, but the band is also known for their eclectic range of covers; including everything from Michael Jackson’s “Thriller” to Rage Against The Machine’s “Bulls On Parade”. The addition of an intense, retina burning, intelligent light show creates an atmosphere unlike any other, assuring fans they’ll get a highly polished, yet different show each night.
TICKETS AVAILABLE HERE: https://ticketf.ly/2KwK9og 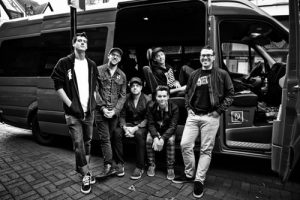 INFO: Once in a while a group comes along that decides to make music simply because they have no other choice – they are addicted musicians. For twenty-two years Boston’s Big D and the Kids Table has proven just that, showing they truly are the DIY kings who are ‘Built Up From Nothing’. McWane describes the group as – “Modern American gypsies” and you will feel just that during one of their explosive shows. Big D and the Kids Table has paved their own way spreading their music to The States, England, Europe, Canada, Mexico, Japan, China, Australia and South East Asia since their beginning in 1996. Starting as a ska-punk band they have released over 13 albums ranging styles of dub, thrash, reggae and their own concoction Stroll: hopscotch, double-dutch, northern soul.
TICKETS AVAILABLE HERE: https://ticketf.ly/2LvAvTq 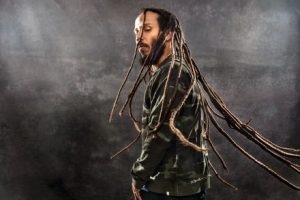 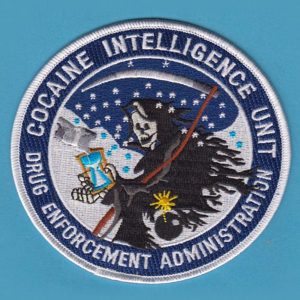 INFO: Chapo Trap House is one of the fastest growing political entertainment podcasts in the country. The New Yorker describes Chapo as “[fighting] for irony in the age of Trump,” while Paste magazine called its hosts “the vulgar, brilliant demigods of the new progressive left.” Mediaite profiled it as “The Funniest and Most F**ked Up New Podcast About Media and Politics.” They have an extremely committed fanbase, and are the largest channel on Patreon with over 20,000 monthly paying subscribers.
TICKETS AVAILABLE HERE: https://ticketf.ly/2AEr0kl 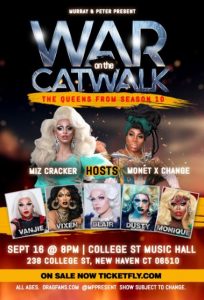 *War on the Catwalk

INFO: War On The Catwalk – The Queens From Season 10. An evening of high energy drag starring some of the contestants from the reality television show on VH1. All ages welcome. There will be a 20-minute intermission. Get tour info at www.DragFans.com
TICKETS AVAILABLE HERE: https://ticketf.ly/2sQts0H 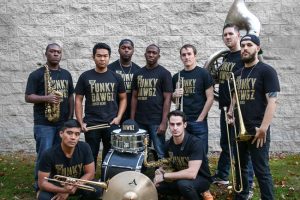 INFO: The Funky Dawgz Brass Band are one of the premier touring acts on the live music scene today. Emerging from Connecticut, these young men have engulfed the spirit and traditions of New Orleans as well as earned the respect from local musicians who grew up and reside in the city. It is impossible not to enjoy yourself during a show as they play a contagious upbeat mix of traditional New Orleans R&B, original music, hip hop, funk, and today’s top hits with a brass twist. They have toured nationally from coast to coast, as well as internationally and have been featured in all corners of the live music scene. From playing sold out shows at Madison Square Garden as the horn section for Dispatch, to Camp Bisco, to closing out The Peach Music Festival, their performances flow seamlessly from EDM festivals to jam band festivals to traditional New Orleans second line parades.
TICKETS AVAILABLE HERE: https://ticketf.ly/2NITJpE 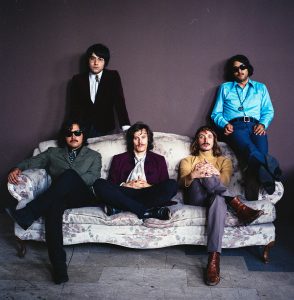 INFO: Based in Echo Park, the Braves — who are signed to influential indie label Lolipop Records — are at the forefront of a white-hot garage band revival, and when the band isn’t selling out shows across the country, they’re playing alongside legendary groups like The Zombies and Brian Jonestown Massacre or providing the soundtrack for can’t-miss fashion events like Saint Laurent Paris’ Spring-Summer 2015 collection. While the group — made up of Julian Ducatenzeiler on guitar and vocals, Tony Malacara on bass and vocals, Shane Stotsenberg on guitar and vocals, Cameron Gartung on drums and Ignacio Gonzalez on organ and tambourine — isn’t straying far from what Ducatenzeiler calls “a blend of influence and sound that is unprecedented in contemporary music”.
TICKETS AVAILABLE HERE: https://ticketf.ly/2KThhrq 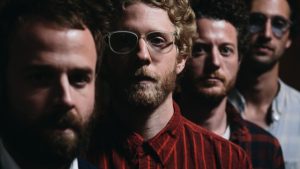 *An Evening with Dawes

INFO: It’s been nearly a decade since Dawes first emerged from Southern California, carrying with them a roots-rock sound that nodded to the past – including the West Coast folksingers and cosmic country-rockers who chased a similar muse during the 1970s – while still pushing forward. Over the years that followed their North Hills debut, the band evolved and electrified. The grooves deepened. The amplifiers grew louder. Once known for their honest approach to classic sounds, Dawes grew into something different: a forward-thinking, boundary-pushing band for the 21st century, willing to follow inspiration wherever it leads. On the group’s sixth album, Passwords, that inspiration pulls guitarist/singer Taylor Goldsmith, drummer Griffin Goldsmith, bassist Wylie Gelber, and keyboardist Lee Pardini into their most universal, topical territory to date. This is a record about the modern world: the relationships that fill it, the politics that divide it, the small victories and big losses that give it shape. Taylor’s writing is personal at points – the result of his recent engagement, which lends a sense of gravity and self-reflection to album highlights like “Time Flies Either Way” and “I Can’t Love” – but it also zooms out, focusing not on the director himself, but on everything within the lens.
TICKETS AVAILABLE HERE: https://ticketf.ly/2Jb7RKE 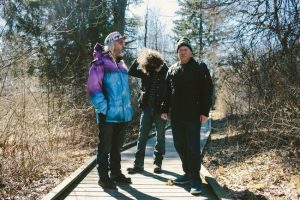 INFO: Let’s face facts — in 2016 it is remarkable that there’s a new Dinosaur Jr. album to go ape over. After all, the original line-up of the band (J Mascis, Lou Barlow & Murph) only recorded three full albums during their initial run in the 1980s. Everyone was gob-smacked when they reunited in 2005. Even more so when they opted to stay together, as they have for 11 years now. And with the release of Give a Glimpse, this trio has released more albums in the 21st Century than they did in the 20th. It’s enough to make a man take a long, thoughtful slug of maple-flavored bourbon and count some lucky stars.
TICKETS AVAILABLE HERE: https://ticketf.ly/2C6F4DY 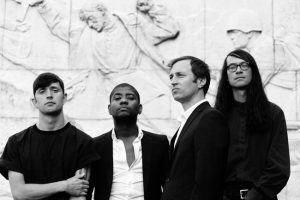 INFO: The multiracial quartet Algiers provides more than mere distraction, but rather a revelatory creative release and wholesale rejection of the globally normative corporate playlist culture. Poke at the seasoned members’ bruised flesh, and out come wafting touchpoints as disparate and intriguing as Big Black, Wendy Carlos, John Carpenter, Cybotron, The Four Tops, Portishead, Public Image Limited, Steve Reich, and Nina Simone, to name but a few. Deep echoes of Black Lives Matter and its 20th century forbears gather, surge, and subside in their often soulful work, a form of principled, acute dissent more interested in learning from the past than in evoking nostalgia.
TICKETS AVAILABLE HERE: https://ticketf.ly/2AVV7Um
CONTEST LINK: https://goo.gl/forms/ukpoBPAKbY6GxmN93 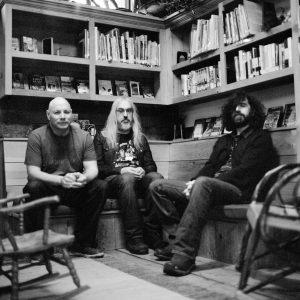 INFO: Over the last three decades, J’s songwriting has continued to pursue confusion, isolation and mis-communication as its main themes (which is one of the reasons he’s always been the artist-of-choice for so many misfits), but he has really worked on the craft of songwriting, and he’s constantly improving his ability to convey these feelings rather than merely inhabit them.
TICKETS ON SALE NOW: https://ticketf.ly/2PU0N4H 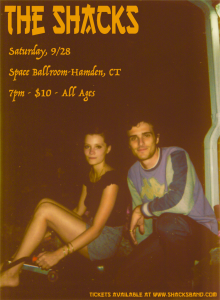 INFO: Fronted by 20-year-old singer/bassist Shannon Wise and 21-year-old guitarist/producer Max Shrager, The Shacks are already well on their way to becoming one of the year’s big breakouts, and their remarkable debut album, ‘Haze,’ solidifies their status as a band with ability to deliver on the well-deserved buzz.
TICKETS ON SALE NOW: https://ticketf.ly/2M3QwQv 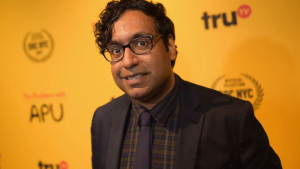 INFO: Hari Kondabolu is a comedian, writer & podcaster based in Brooklyn, NY. He has been described by The NY Times as “one of the most exciting political comics in stand-up today.” In 2018, his Netflix special “Warn Your Relatives” was released and he was named one of Variety’s Top 10 Comics To Watch. 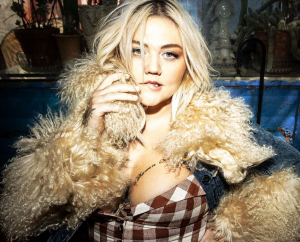 INFO: King views Shake The Spirit as an evolution not only of herself as a musician and writer but “as a human being,” she says. “This music is truly me. I said what I wanted and what I believed in and I really wouldn’t take a step back. It’s exciting for me to show people that you can struggle, but if you don’t give up on yourself you can get through things and become a better person. I have my year and a half summed up in one crazy-ass, goddamn album and I’m proud of that. I’m ready to bare my spirit and soul and heart and hardships to the world and say, ‘You know what? I got through it. And this is how I did it.’”
TICKETS ON SALE FRI. 9/14 @ 10AM: https://ticketf.ly/2wRe3yi 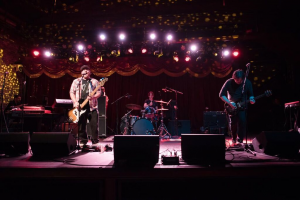 INFO: Punk Infused Anthemic Rock Music – JOUNCE is an East to West Coast band centered in Brooklyn, NY. An ever evolving post punk and 90′s rock hybrid. A product of a well defined generation only re-imagined. Nearly impossible to describe but easily digested. Danny and Matt have been friends since childhood, even through Dan’s bi-coastal lifestyle while he was Nickelodeon’s “Little Pete.” We like to think Pete Wrigley would dig the Jounce.
RSVP Here: https://ticketf.ly/2QlRBGm 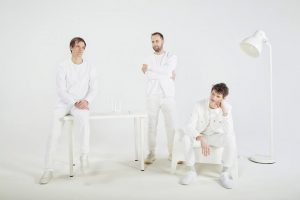 INFO: Houndmouth signed with legendary indie label Rough Trade Records in 2012. From The Hills Below The City landed them on several world-famous platforms such as fellow lovable Hoosier, David Letterman’s stage. When vocalist, guitarist, and songwriter Matt Myers first spoke with big-name producer Dave Cobb prior to working together on their sophomore LP Little Neon Limelight, the two laughingly agreed to “not make another fucking boring Americana record.” A natural sounding album captured in a familiar fashion came together, except this time with a #1 adult alternative radio single in “Sedona.” “I never once thought of us as an Americana band,” says drummer Shane Cody. “The four of us were just a rock band, but some of us had Southern accents,” he laugh.
TICKETS ON SALE NOW: https://ticketf.ly/2LXZ1MF