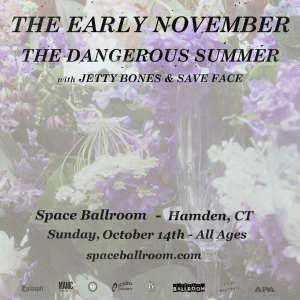 Hello reader! Welcome to this week’s edition of our Redscroll blog post. We have a bunch of exciting show announcements this week! Just announced at Space Ballroom we have local Grateful Dead Tribute group Shakedown (11/21) and Ontario indie rockers, Tokyo Police Club (3/9/19). As a part of our weekly emerging artists series Manic Mondays at Cafe Nine, we have Brooklyn-based project, Elizabeth and the Catapult (11/19) who recently opened for Sister Hazel.

CONTEST TIME! Enter for a chance to win a pair of tickets to see The Early November & The Dangerous Summer at Space Ballroom (10/14) with special guests Jett Bones and Save Face. Along with the tickets you’ll also have the option to choose one merch item from The Early November.
Enter Here!: https://goo.gl/forms/8df7Mx6IRWIfvGYp2 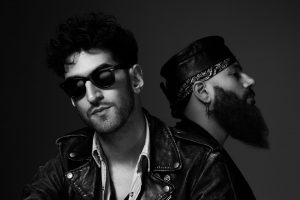 INFO: Chromeo is Dave One and Pee Thugg, also known as David Macklovitch and Patrick Gemayel. Two best friends that have been doing music together since they were kids. Before establishing themselves as a band, Chromeo were making beats for well-known Québec hip-hop acts such as Shades Of Culture, Dubmatique, Sans Pression and Yvon Krevé.

In the summer of 2000, Tiga, a fan of Obscure Disorder, stepped to Dave and asked him if he was interested to do an electronic music project on Turbo. In 2001 were signed by Turbo when they finally put together a demo. With Chromeo, expect to hear a lot of analog synths, rock guitars, 808’s, rhodes and talk box.
TICKETS STILL AVAILABLE HERE: https://ticketf.ly/2t0JLrW 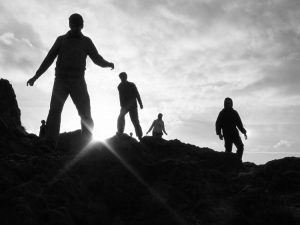 INFO: Formed from the shell of a Go-Go’s cover band named Raspberry Bang (featuring the inimitable Rusty Nails), SWIRLIES began their life in Boston/Cambridge, MA in the summer of 1990. The original band featured Damon Tutunjian (guitar/vox), Seana Carmody (guitar/vox), Andy Bernick (bass), and Ben Drucker (drums). SWIRLIES played live for the very first time on 25 January 1991 at the Alcove in Allston, MA. In these early years, SWIRLIES wandered the Northeastern Megalopolis with other like-minded folks, releasing 7″ records through the kindness of Slumberland, Pop Narcotic, Cinderblock, and other labels. Billy Ruane was there. And then SWIRLIES signed to the ‘local’ label Taang! Records in 1992. Our first two releases, the ’What to Do About Them’ EP (a collection of previous 7″s and new tracks) and ‘Blondertongue Audiobaton’ LP, were created and recorded by an amalgamation of the original members and other mysterious entities. After school ended for the season, Andy returned to join Morgan and the band. Thus, SWIRLIES explored the sensual realm known exclusively to bands with two bass players. Photo of the Swirlies in 2003Some examples of recent activity, also known as Grim Death Throes: 1) SNEAKY FLUTE EMPIRE, our special alter-ur-label with cassette and CD releases; 2) THE YES GIRLS, a sneaky-flute-music-playing group featuring Damon and occasionally some combination of Rob Laakso, Andy Bernick, and Ron Rege; 3) RICHMOND COUNTY ARCHIVES, a label with various tangential releases 4) SWIRLIES’ MAGIC STROP, a series of old SWIRLIES sounds offered as free web releases on this very site.
TICKETS STILL AVAILABLE HERE: https://ticketf.ly/2JbyRtr 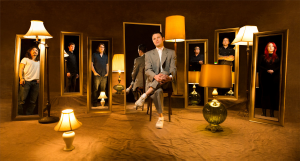 INFO: Start Making Sense are selling out rooms throughout the eastern half of the United States. This band is a huge hit as the Talking Heads are never on tour, and the band’s amazing dedication to the music and fun loving attitude has proven to be a favorite at clubs and festivals.

If David Byrne is one of the geniuses of modern times, then Start Making Sense is a tribute to genius. The musicians in this 7-piece Talking Heads Tribute take pride in faithfully recreating the music of Talking Heads entire career, including songs Talking Heads never performed live! Together they bring much of the Heads unique live show to the stage, with front man Jon Braun as a spot-on David Byrne, some have said this is the closest thing you’ll get to seeing Talking Heads again.
TICKETS STILL AVAILABLE HERE: https://ticketf.ly/2JOdE9g

INFO: “We never broke up,” Dressy Bessy singer/guitarist Tammy Ealom says on the occasion of the release of KINGSIZED, her band’s first new album in seven years. “It was never our intention to drop out, it just sort of happened. We were dealing with life, but we never stopped making music.” Indeed, the 13-song KINGSIZED makes it clear that, nearly 20 years into their career, Dressy Bessy are making some of their most compelling and accomplished music. Such melodically infectious, lyrically barbed new tunes as “Lady Liberty,” “Make Mine Violet” and the anthemic title track are potent examples of the band’s uncanny ability to wrap Ealom’s personally-charged, pointedly subversive lyrics in sparkling, irresistibly catchy songcraft.

In addition to showcasing the band’s musical chemistry, KINGSIZED also draws upon the talents of a wide assortment of friends, admirers, and contemporaries. R.E.M’s Peter Buck adds distinctive 12-string guitar on “Lady Liberty” and “Cup ‘O Bang Bang,” while legendary Pylon frontwoman Vanessa Briscoe-Hay adds her voice to “Get Along (Diamond Ring).” Minus 5/Young Fresh Fellows mastermind Scott McCaughey plays keyboards on “Make Mine Violet” and “57 Disco” and R.E.M’s Mike Mills sings on the band’s distinctive rendering of the George Harrison classic “What Is Life,” which appears as the b-side of the 7″ single release of “Lady Liberty.”
TICKETS STILL AVAILABLE HERE: https://ticketf.ly/2wB7MGM 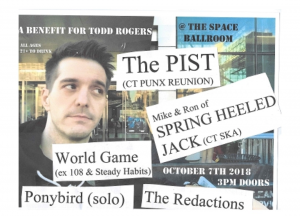 INFO: Every scene has unsung heroes who spend their lives contributing to that what has brought us all together. Todd Rogers is such a person. As frontman of prolific CT punk act Boiling Man, to working at the legendary Tune Inn and painting their iconic sign, to spending 15 years as art director for Asbestos Records (as well as designing albums, shirts and websites for dozens of other CT bands, labels, record stores, coffee shops, and dozens of posters for Manic Presents. Todd recently suffered from a debilitating condition that led to having emergency surgery to remove and replace 4 discs from his spine. Even after insurance coverage, the operation and subsequent rehab ran tens of thousands of dollars out of pocket, and Todd will have to spend months of recovery to get back to his art. Asbestos Records & Manic Presents are hosting this show to help Todd get back on his feet. Tickets available on a sliding scale, and any additional donations are greatly appreciated.
TICKETS STILL AVAILABLE HERE: https://ticketf.ly/2xtTZlM 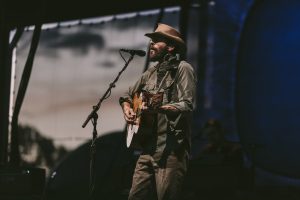 On his previous solo tours, critics across the US were raving about his performance. Consequence of Sound said, “Hearing Ray LaMontagne perform live is a poignant and magical experience,” while The Boston Herald raved, “LaMontagne’s voice remains a marvel, quiet and reflective one minute and forceful and impassioned the next. It really is an amazing instrument.”
TICKETS STILL AVAILABLE HERE: https://ticketf.ly/2uu1JUt 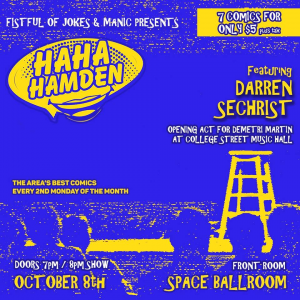 INFO: Darren Sechrist is one of New England’s top comics. Clean but subversive, insightful yet idiotic, Darren’s comedy is a hilarious mix of contradictions. Sound impossible? See him for yourself to find out. He has performed at clubs and theaters across New England and New York, including: Comic Strip Live, the Funny Bone, the Comedy Connection, and Comix. Along the way, Darren has shared the stage with top comics such as Demetri Martin, Henry Phillips, Joe Machi, Alingon Mitra, and Sean Donnelly.
(TICKETS AVAILABLE AT THE DOOR) 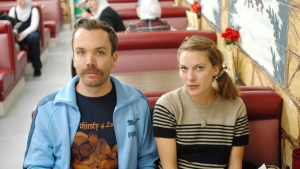 INFO: A Hawk and A Hacksaw began in 2000 in the small town of Saumur, France. Initially a solo vehicle for Neutral Milk Hotel drummer Jeremy Barnes, the main impetus of the project was to focus on the gray areas in borders of music and geography. The first album was released in 2002 by Cloud Recordings. Barnes met violinist Heather Trost in 2004 and the band became a duo. The pair has since released six albums, and toured extensively around the world. They have learned from and collaborated with some of the great musicians of Romania, Hungary, Bulgaria and Turkey. The duo has been invited to tour with Swans, Calexico, Wilco, Andrew Bird, Portishead, Of Montreal and performed at Roskilde, Pitchfork Music Fest, and All Tomorrow’s Parties. They also collaborated with Iggy Pop on the reworking of a classic sea shanty. The duo play nearly every instrument, but have some wonderful guest musicians on a few tracks- Turkish clarinetist Cüneyt Sepetçi, Hungarian cimbalom master Unger Balász, Chicago trumpeter Sam Johnson, who often tours with the group, Deerhoof guitarist John Dieterich, and New Mexico bassist Noah Martinez of the band Lone Piñon.
RSVP HERE: https://ticketf.ly/2OEWzNV 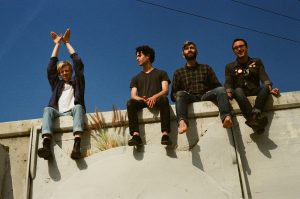 INFO: By 2016, singer-bassist and chief songwriter Dave Monks had settled into life in New York City he made a solo record and did some co-writing. Drummer Greg Alsop was living and working in L.A. Keyboard player Graham Wright and guitarist Josh Hook remained in the band’s native Canada. Tokyo Police Club created songs via e-mail, thinking they had enough natural chemistry and experience to make that setup work. But eventually, the lack of friction meant there was less musical spark, and it dawned on everybody that the end was near. Right out of the gate, TPC felt energized and unstoppable, with critics and fans on their side. But as the band and the world evolved, they began to feel diminishing returns, though no less pressure. “In the mid-aughts, we were quite the thing there for a second,” quips Wright. “Things started to level out for our career. Knowing that the tenth anniversary Lesson in Crime tour might be our last, I found myself really alert and drinking it all in. “The feeling that we were so close to breaking up gave us the freedom to enjoy each other more, to enjoy making music together,” says Alsop.The expectation was just that we’d do something that would make us happy.” “I think there’s a lot more optimism and a lot less confusion now,” says Monks. “That’s why we called the record TPC. It was a whole process of looking at the band and deciding what it is. There’s an excitement and optimism. Let’s just let it exist.”
TICKETS ON SALE FRI 10/5 @ 10AM:  https://ticketf.ly/2NViFyK 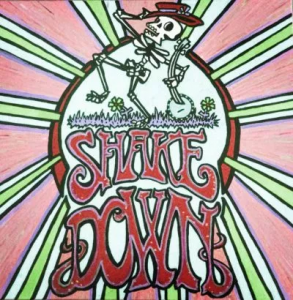 INFO: Shakedown is a Connecticut based band that has been performing their unique version of a Grateful Dead Concert since 1987. Shakedown features wonderful three part harmonies with varied and interesting jams that reflect the band members’ special chemistry. A loyal following of fans has blossomed over the years, and Shakedown performs regularly at Toad’s Place in New Haven and at almost every major music venue in Southern New England. They also perform yearly at StrangeCreek Campout and Wormtown Music Festival. Shakedown has been awarded winners of the CTNOW Music Award as the “Best Tribute Band” in Connecticut multiple times. From “Truckin” to “Touch of Grey,” Shakedown will make you dance till you drop!
TICKETS AVAILABLE HERE: https://ticketf.ly/2y1SPP4