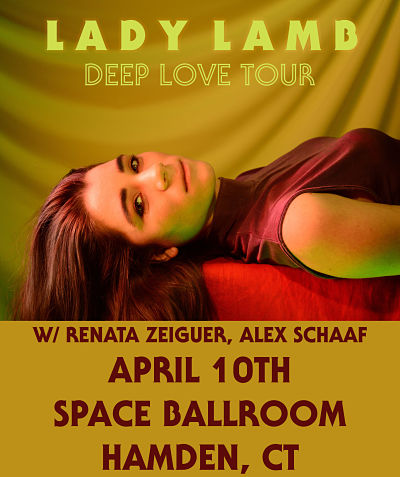 We’re back with our weekly Manic Presents Redscroll Blog! As usual, we’re here to share some exciting show announcements and remind you of the great shows happening this week. Just announced at Space Ballroom we have Ghost Light feat. Holly Bowling, Tom Hamilton (JRAD), Raina Mullen, Scotty Zwang, Dan Africano on (5/9) and Frank Iero and The Future Violents on (5/31)! Tickets for both shows will be on sale tomorrow at 10AM!

CONTEST TIME! Enter for a chance to win a pair of tickets to Lady Lamb at Space Ballroom on (4/10) and a CD copy of “After”!
Enter here: https://goo.gl/forms/ZRSBqkseg49f5OoD3 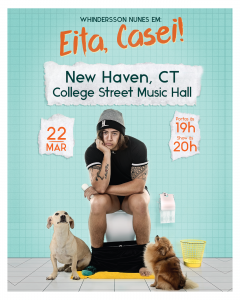 INFO: Brazil’s biggest youtuber presents his new and stunning spectacle EITA, CASEI! With all the versatility of a natural comedian. Different of everything and with a new speech that you’ve never imagined to watch on a humor show. The “Internet King” got married and now he tells everybody about the marriage process from the choice of Luísa’s dress to the maid of honour and best man besides relying on his peculiar way of life as a married man. Everything you need to know before you take a big step in your life!

In addition to talking about marriage, he does not stop talking about issues that contribute even more to personal growth. The Humorist talks about overcoming, lifestyles and of course, with a humor unequaled in the way that only Whindersson can do. “I’m very happy to be able to do this show. I’ve tried to innovate in this presentation, and I’m quite looking forward to this presentation. In this show I will tell you in detail how this whole process went, from the first day of the honeymoon to the first discussion of the underwear in the room and the lid of the toilet, “Whindersson jokes. With amazing costumes this will be a manner to see Whindersson Nunes in a way that has never been thought of throughout his career.
TICKETS AVAILABLE HERE: https://ticketf.ly/2Lmqzwz 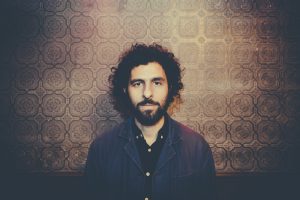 INFO: Performances by Jose Gonzalez of his two decade long repertoire with an orchestra.

Founded in 2007, The String Theory is a Berlin and Gothenburg-based artist collective, think tank, and experimental chamber orchestra that explores the outskirts of contemporary classical music, electro, noise, Neue Musikm and pop by means of workshops, studio recordings, and live performances. In addition their collaboration with González, The String Theory have formed artistic co-operations with a stunning range of musicians and artists, among them include Einstürzende Neubauten, Wildbirds & Peacedrums, El Perro Del Mar, Tocotronic, Dieter Meier (Yello), Shara Worden (My Brightest Diamond), Tindersticks, and many others.
TICKETS AVAILABLE HERE: https://ticketf.ly/2ssyUX2 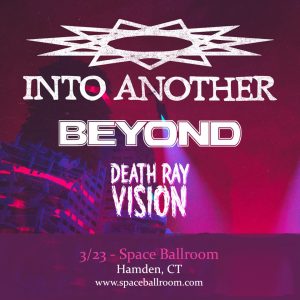 Into Another, Beyond, Death Ray Vision 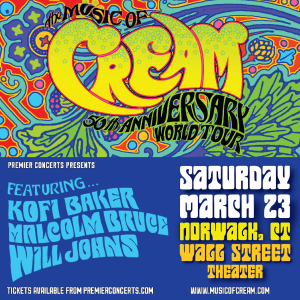 The Music of Cream

INFO: Cream was a chemical explosion like no other, the blueprint for every supergroup to follow and the heavy blues precursor to Hendrix, Zeppelin and so much more. Fifty years since their earth-shaking debut album, the bloodlines of that hallowed trilogy come together to pay tribute to Cream’s legendary four-album reign over the psychedelic frontier of the late 1960s. Kofi BAKER (son of Ginger) and Malcolm BRUCE (son of Jack) unite with Will JOHNS (Eric’s nephew by Marriage and son of Zeppelin/ Stones/ Hendrix engineer Andy) to unleash the lightning that electrified a generation. Feel the fire and the freedom of “Spoonful”, “Strange Brew”, “Sunshine of Your Love”, “White Room”, “Crossroads” and “Badge” — performed by master musicians whose lives have been steeped in the Cream spirit and legacy.

EXPERIENCE a Once-In-a-lifetime concert salute to the most innovative and explosive supergroup of all time, in the hands of those that knew them best.

WATCH as they interplay live with their fathers on the big screen; classic moments in rock history brought back to life.

LISTEN as they share personal insights and stories, complete with rare, yet to be seen family footage and photographs.
TICKETS AVAILABLE HERE: http://bit.ly/2Tt7WKA 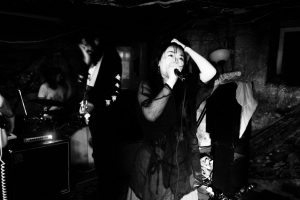 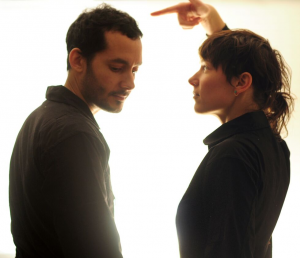 Buke and Gase, Ports of Spain

INFO: Buke and Gase make pop music in the most insane way possible‚ through long periods of ecstatic collaboration executed with a kind of monastic discipline. They are a band that wears genre tags lightly: Soon after releasing their EP-length demo +/-, they became an “indie rock” obsession shared by The National & beloved cult podcast Radiolab. Their debut album Riposte found them categorized as “steampunk art-folk”; they excelled at this, and became a favorite of NPR Music and were invited to perform on an early season of their Tiny Desk Concert series. Their second album General Dome appealed equally to metal, math rock & avant garde music fans, and spawned their closest thing to a hit thus-far: “Houdini Crush,” which opens with a massive guitar riff and blooms into a frenetic round. It was behind this record that the band first toured the world, performing alongside & often serving as hand-picked support to a who’s who of music icons: Laurie Anderson & Lou Reed, Shellac, Battles, Reggie Watts, Swans, Deerhoof, Owen Pallett & Mike Patton’s metal supergroup Tomahawk among others.

And then came a public silence — five years of it.

Aron & Arone were hardly dormant. Relocating full-time to the upstate artists’ haven of Hudson, New York, the duo recommitted to their sometimes punishing work ethic, clocking in & out for months on end with a fervor that indicated this job they’d created for themselves was also their greatest pleasure.

They embraced the freedom of playing & recording largely for their own consumption and creative fulfillment. They stepped out on their own creative journeys. Arone Dyer’s voice was the first thing anyone heard of The National’s Grammy winning Sleep Well Beast album, singing the introduction to #1 AAA radio charting “The System Only Dreams In Total Darkness.” She also moonlighted in side projects Mistresses & #dronechoir; participated in Justin Vernon and Aaron & Bryce Dessner’s PEOPLE festivals, and sang with Bon Iver & The National on nationally broadcast late night TV. Aron Sanchez invented the chordstick, a bespoke percussion/guitar mash-up for Bryce Dessner’s acclaimed “Music for Wood & Strings” project — and remained central to producing instruments for the Blue Man Group.

Three years ago, they embarked on a major refinement & modernization of their instrumental creations — and embraced electronic music. Together they developed Arx, a device that revolutionized their performance, allowing them to trigger percussive sounds, change effects on their instruments, and control vocal harmonies all with the punch of an arcade button. They have largely retired the buke (bass ukulele) and gass (guitar-bass). The band no longer sit through their performances exclusively — a reinvention unveiled when they opened for The National at massive venues across Europe last autumn. Buke and Gase stopped being defined by the instruments which gave them that name. Their new album Scholars began not as the title of their new record, but a possible-new moniker for the band.

Although their distinct musical character is still recognizable, the songs on Scholars embrace a form of expression that is more concise, more emotional & less perverse in its uniqueness. The album was honed from 60+ songs and hundreds of hours of recordings into a concise document clocking in under 40 minutes. In a way, their long & roundabout journey has resulted in a sound that’s coincidentally in sync with our most forward thinking contemporary artists — James Blake, Bjork/Arca, Frank Ocean. They have embraced the same computer- and synthesizer-driven creative tools that make EDM and trap music function, while existing entirely in their own, fully imagined universe of sound.
TICKETS AVAILABLE HERE: https://ticketf.ly/2zGtWtz 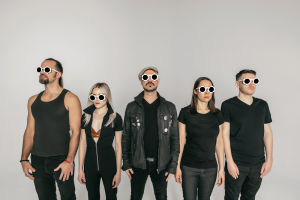 INFO: In that sense, Ghost Light’s brilliant debut album, ‘Best Kept Secrets,’ functions much like the band itself, drawing beauty and strength from both its complementary pairings and its unexpected juxtapositions. Formed in 2017, the group brings together five consummately talented artists from across the musical spectrum—guitarists/singers Tom Hamilton and Raina Mullen, pianist Holly Bowling, and drummer Scotty Zwang—and thrusts them into a wholly new context. The result is a record that transcends the sonic contributions and background of any single member, a collection that’s at once gritty and refined, sprawling and restrained, straightforward and psychedelic.

Though the performances on the album are laser focused, the group’s live shows are a far looser affair, with tracks frequently blossoming into extended improvisational journeys dictated by the emotional temperature of the room on any given night. Songs turn into wordless conversations between all five members, a tide-like give-and-take that makes each show wholly engrossing and utterly unique.

“An album is…a document and snapshot of a particular moment in time,” Hamilton told Live For Live Music in a recent interview, “but when it comes to taking that album and bringing it into the live arena, that’s when we turn ourselves back into the improvisers that we all are. We get to really see what these songs can do and where they can go.”

With a formidable live reputation already preceding them, the band sold out the opening night of their inaugural tour and they haven’t looked back since, playing a slew of headline dates around the country in addition to entrancing festival crowds from Lock’n to High Sierra, Peach Music Festival, Electric Forest, and beyond.
TICKETS ON SALE 10AM Fri 3/22: https://ticketf.ly/2FkJx5m 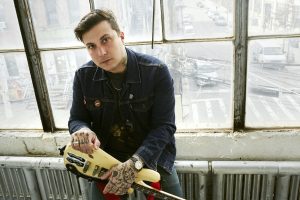 Frank Iero and The Future Violents

INFO: Frank Anthony Thomas Iero, Jr. (born October 31, 1981) is an American musician who was the rhythm guitarist and backup vocalist of the rock band My Chemical Romance and post-hardcore band Leathermouth.

Following the recent announcement that Frank Iero has signed to UNFD and formed his latest band FRANK IERO AND THE FUTURE VIOLENTS, the first track from his upcoming album BARRIERS (out May 31, 2019) “Young and Doomed” is now available via DSPs and streaming services. Premiered on BBC Radio1 with Annie Mac, the insistent, dark rock n’ roll anthem flails with a wild and uncontrollable angst and energy. Its accompanying video is a visceral performance piece that captures the frenetic and frantic energy that bursts from the track with guitar, bass and drums with Frank’s plaintive vocals anchoring the hopeless emotion. Directed by Steve Pedulla from Thursday, the video features childhood photos of Frank Iero and The Future Violents.
TICKETS AVAILABLE 10AM FRI 3/22: https://ticketf.ly/2HscDkH