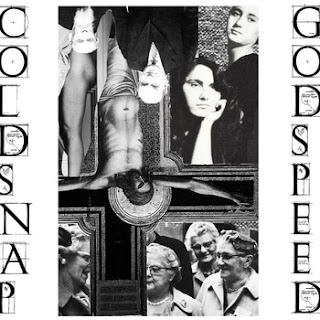 Cold Snap, from central CT, plays left-of-center, slow, noise-rock influenced hardcore. They sound like Unsane. You want to bang your head, but you can’t. Ben’s my dude (on bass). Jack (vocals) will punch you or get punched. Mario (guitar) lost mad weight; he’s a sexy Portuguese fellow. Al D. (drums) is of many bands (Pale Horse, Brass Caskets) and screen prints (Shop Shogun). They have a long ex-members roster, but it wasn’t until this line-up that they finally hit their stride.

When asked about their sound, Ben had this to say, “I’m trying to sound as twinkle-free as possible.”  We like that idea because the opposite sounds like Phish and I don’t think Phish and hardcore mix.

Here’s a clip of them playing live:

They are playing the Converge show that we posted about previous to this so there is a nice way to check them out live soon (though tickets for that will be all but gone – something like 30 left). The image posted at the top is the cover art from their 7″ released by Hot Air Press in 2009.  Be on the lookout for a split 7″ with another CT band (that Al D. also drums for) in the near future.  They also have a 7″ coming out on Get Young Records out of MA.  Sounds from that first 7″ are here: