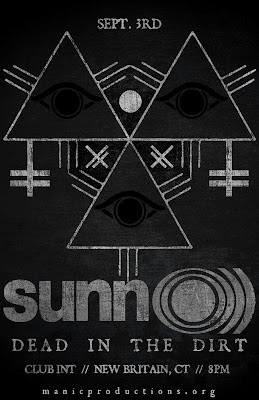 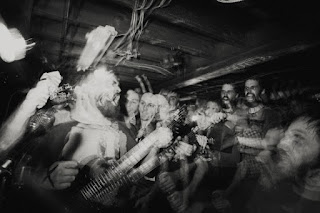 Dead In The Dirt
Dead in the Dirt was formed by guitarist Blake Connally (ex final expression, me and him call it us) in Dec. 2008. This project did not see much progress occur in the first two years until the addition of drummer Hank Pratt (foundation, daymark, skull kingdom). Bo Orr (Mosaic) would then join on bass and provide vocals as well. Their debut release “Vold”was self released in summer 2010. Their follow up release was a Tour EP for the band’s first west coast tour with Foundation. Their third release will be a 10 song 7” released by Southern Lord Recordings in September 2011.

Dead in the Dirt also played “here” (at the secret location near Redscroll) last September – it was a powerfully loud and fast good time.

Vold e.p. by dead in the dirt

Rick will also be playing records between bands (fun fact: Rick booked the first sunnO))) show with Manic Productions). Incidental music for talking over and making conversation about that is relevant in some way to the bands playing will be played (read that clunky sentence 5x fast).

Club INT is a new (a revitalized Sports Palace) club in New Britain and is very promising for the future of live music in CT.  The sound system is impressive and I know that Manic is bringing even more than what they already have there to accommodate sunnO)))’s requests completely! Here’s a shot of its insides with As I Lay Dying playing:

The Redscroll mobile distro will be making a rare appearance here.  It may be the only one of the year! We’ll be bringing plenty of metal (very focused selection), but if you want something specific brought to this please let us know (redscroll@gmail.com is the best way).