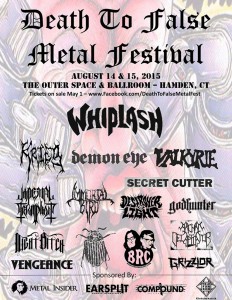 This weekend at The Ballroom and Outer Space in Hamden, CT we will be celebrating the launch of what we can only hope becomes one of the premiere underground metal festivals in the land. The Death To False Metal Festival features 15 bands over two nights – Nine nationally recognized touring acts, and six of the best local heavy bands CT has to offer – for a pretty nominal fee ($15 each night, so only $2 per band if you go both nights).

First, let’s get something out of the way that seems to be a sticking point with some people. No, the name of the Festival is not to be taken in complete seriousness. In the tradition of some of the greatest crossover thrash and grindcore acts, there is a whole lot of tongue-in-cheek going on. But, that’s not to say it’s completely…false. Death To False Metal, in a way, is in fact flying a banner for future iterations to follow. Let’s be honest with ourselves for a moment. There’s a lot of generic stuff floating around out there, both at home and abroad. There is no reason why this Festival (or any other) shouldn’t want to separate the wheat from the chaff.  We want the best bands from every corner of the metal universe to come to Connecticut every year and melt our faces right off. Personally speaking, I don’t think there is anything wrong with that.

So let’s start with the six local acts. The hardest part about booking this Festival was choosing which local acts to play it. There are another half dozen, at least, that could have easily slid into one of these six spots. Bu the six this Festival does contain are all at the top of their respective games. Friday features New London doom/sludge two-piece Bedroom Rehab Corporation, CT’s sleaze fiends 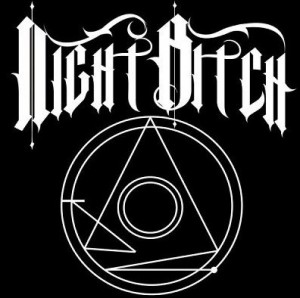 and the 2x winner of Best Metal act from the CT Music Awards, Vengeance. All three bands have either new material about to hit the streets or just released new material. On Saturday night the locals consist of two of New Haven’s loudest – noise rock trio Grizzlor, and doom/crust trio Tomb & Thirst – alongside death metal quintet Archaic Decapitator. Again, all three bands have released new material over the last few months that you should be listening to. (Sense a pattern yet?) 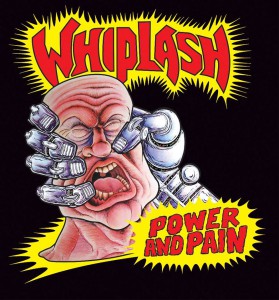 eatures Pete Adams of Baroness on guitar and they come armed with a brand new record out on Relapse. This is a band I’ve personally followed long before Baroness was a thing so I’m extra stoked that they are a) back together and b) playing their only show north of the Mason-Dixon Line so far this year at our little shindig. Whiplash rounds out the Friday night bill and if you don’t know who Whiplash is, please turn in your Metal ID card at the front desk on the way out the door. One of the most important and influential US thrash bands of all-time. Period. 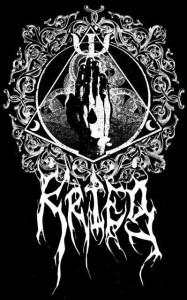 s. Their Self Titled album from last year was easily one of the best metal albums to flow from the States that not enough people heard.  Chicago’s Immortal Bird are a band on the rise. Their brand new album Empress/Abscess is going to wind up on a lot of year end lists this year and they deserve it. Killer blackened death/crust/thrash/doom. North Carolina’s Demon Eye are named after an obscure Deep Purple song so that should give you some idea of their retro vibe. Finally, Philly’s Krieg are a seminal USBM outfit, honestly one of the most influential US black metal bands of all-time. No joke.

Two stages will take turns running all night on Friday and Saturday and with one hallway between them for easy access there is no reason why you honestly couldn’t catch 15 sets from 15 amazing bands this weekend. On Friday night doors are at 7:30 pm and music starts at 8:30. Saturday doors are 6:30 pm and music starts at 7:30. So make sure you come down early for maximum shredding. Also on Saturday, Telefunken will be setting up shop at the venue and recording anyone who wants to jam acoustic using their amazing mics. Those acoustic performances will be recorded for posterity’s sake as well.

Maybe one day this Festival blows up and becomes the biggest thing this side of the Atlantic, maybe it just blows up. Regardless you’re not going to want to miss out on the maiden, and kvlt, voyage.