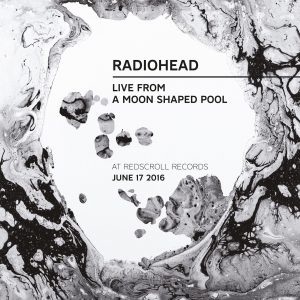 New Radiohead music comes out on LP/CD Friday! We’ll have it, yes. We will have the indie exclusive version of the vinyl for sure. We are also participating in an event coinciding with this release.

At 1PM we will be streaming a special Radiohead  audio stream which will only be heard at participating stores (like us!).  The broadcast will include music selected by the band as well as a very special 2-hour live set of performances from their latest tour featuring songs from the new album as well as old Radiohead favorites.

Anybody who comes by during this event can enter a free prize drawing with prizes being:
1. A selection of unique figurines used in the making of the Radiohead video “Burn The Witch” directed by Chris Hopewell.”
2. Limited Edition screenprint of Stanley Donwood artwork from his “A Moon Shaped Pool” series.
3. A 35mm celluloid print of the Paul Thomas Anderson directed video “Daydreaming” in a film canister.

We will also have some posters to give away for anyone coming through.

In short, if you’re a Radiohead fan then Friday is the day to be here. 1PM start and we close at 8PM as usual.