Cinco De Metal (5-5-10)
Occasionally we help out some friends by perpetuating their pursuits. On this coming Wednesday (Cinco de Mayo – see the clever word play in the title? Bingo.) we are helping out with a show in the area. It’s very close – so close that our back lot serves as the venue’s parking area. 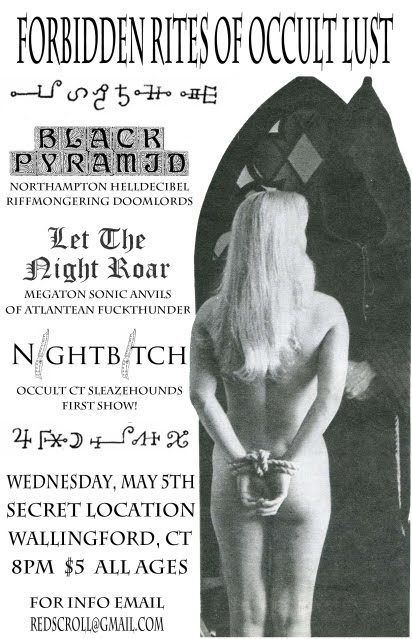 Black Pyramid are a band out of Northampton with a description that goes, “Black Pyramid play doom with the rumbling down-tuned tones of stoner metal gods like Sleep, Electric Wizard, and High On Fire, but with the epic arrangements of old school metal and doom acts such as Black Sabbath, Pentagram, and The Obsessed. Add to the sonic brew perfectly executed forays into vintage psych and progressive rock, along with the apocalyptic lyrical ravings about war, the occult, and general alienation, and you’ve got an accurate picture of what the band is all about. Prepare to be crushed by the weight of the Black Pyramid…”

Let the Night Roar feature a former member of Leviathan and Malevolent Creation. I’m only saying that because it seems to be said over and over wherever I look. This band stands on its own merits. Here’s some press: These guys combine the doom parts of High On Fire and Sleep with the dirty sound of Celtic Frost and Venom. Very important to bands of this sound. I believe that Let The Night Roar will manage to put their name next to all the other important bands of the sound. —-HARM Magazine

And finally and most eagerly anticipated are our friends in Nightbitch which features Phil of Hour of 13 and Ryan from Ipsissimus (among other righteous brethren). “Riffs and sleaze.” Black Sabbath. The occult. Alucarda. Haxan. Asphyxiation. Walpurgisnacht. First show.