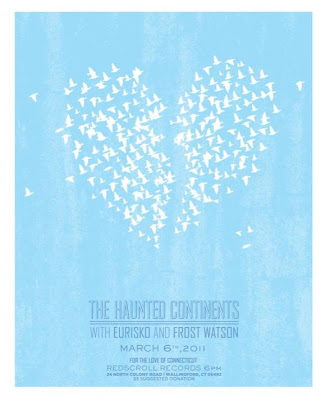 Haunted Continents stems from a pretty simple idea: mix 50s bop and soul with 90s alternative. But it’s not like Buddy Holly playing Weezer tunes; it’s more like the other way around. Or maybe it’s a concoction of both, you know? Either way, the tunes are catchy, the guitars are heavy and The Loudest Year is thirty-one perfect minutes of fuzzed-out vintage rock and roll goodness … a perfect winter companion for heart-broken lo…vers and nerdy fan boys through out the land.

Eurisko is a 5-piece rock band from the greater New Haven/Waterbury area that formed in early 2010. Since their inception they have developed a sound soaked in whiskey, multi-layered guitar riffs, and grim lyrics. Influenced primarily by folk and indie rock, Eurisko’s music spans from quickly paced melodic ballads to deep, creeping songs carrying shipments of woe. Combining three guitars, bass, and drums, Eurisko sets the scene for the dynamic narratives that characterize their unique style of songwriting. Eurisko has drawn comparisons to Tom Waits, The Decemberists, Murder By Death, and Bright Eyes.
FREE DEMO HERE: http://www.ilike.com/artist/Eurisko/songs

Frost Watson have the sound of pop punk in the ’60s. They’re from PA and NY. Come check them out. Check everyone out. See you Sunday.