A few weeks ago someone traded in a test press version of the “The Division Has Begun” compilation on East Coast Empire Records. This is an amazing piece of Connecticut’s hardcore history featuring five of the most important bands from the late 90’s; 100 Demons, Death Threat, Fear Tomorrow, Mans Ruin, & Divided By Hate. ECER was also the best hardcore label in CT hands down. The test pressing info was unknown so I contacted Dave Duncan, owner of ECER. He said that there are 20 rejected & 20 accepted tests. It turns out, he still had some ECER stock in storage as well. Which I happily bought off him! 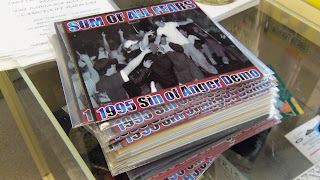 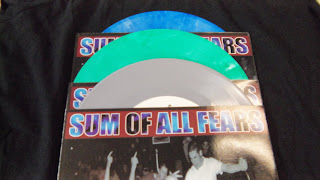 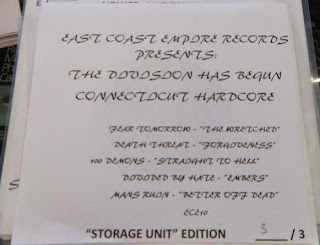 These copies of the compilation came without covers, so I was given permission to make a DIY photocopy cover. Please note that I used the most 90’s hardcore font my computer had to offer.

Dave Duncan is also the owner of 5th Dimension Skate & Snow in Prospect, CT. A business that has been open since 1995. When I was younger (12-14 years old), he also sold hardcore out of it, since he was also running ECER at the time. This was one of my earliest influences showing and proving that you could own your own business, be your own boss, and have it be something that you love and feel passionate about. Without this exposure, who knows? There might not have been a Redscroll Records.
Two ECER-related stories real quick:
When I was 13 I booked some NYHC bands (who I won’t name) and the show bombed big time. I was only in charge of the venue, John Zumbo (R.I.P.) was in charge of the bands, but somehow I got stuck with the debt at the end of the night They demanded hundreds of dollars I didn’t have and wasn’t going to get anytime soon. I was getting pretty regular phone calls and internet harassment. Dave Duncan & Craig Mack (Follow Through / Fear Tomorrow / Living Hell) told me to let those NY dudes know that they took the money and that if they wanted it, they had to take it from them. I never got another message or threatening phone call again. CONNECTICUT BROTHERHOOD!
At a Sum Of All Fears show at the Hanover House in Meriden, CT I got kicked in the mouth by Dave Duncan and my bottom front teeth got knocked loose and pushed backward. I spit blood for the rest of the night and ended up having to throw out my blood & spit covered t-shirt at a Dominos Pizza so my parents wouldn’t see it. I didn’t end up losing the teeth, they’re just way more crooked. CONNECTICUT HARDCORE!