At some point I (Rick) rearranged the inventory during the week so that I didn’t keep the last week’s stuff in line.  I think this is everything, but there is the possibility we got more than what is listed below.  Give us a call if you’re curious about anything in particular.  Heck, give us a call anytime you want us to get something you don’t see listed.

Elzhi (And Will Sessions) Elmatic LP 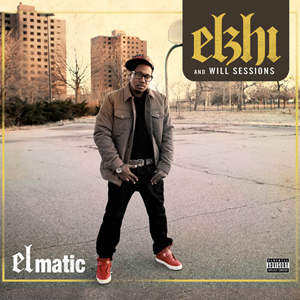 (Fat Beats / Jae.B Group)
Elmatic… Illmatic. That’s the essence of this – Elzhi’s (pronounced EL – ZI (as in eye)) The Detroit take on Nas’s quintessential New York classic.  Outrageously bold to do this and then beyond bold to release it physically (and not just like a Wugazi joint – which in my opinion is worth only one full listen).  I’ve listened to Illmatic more times than I can exaggerate about (a number so big that if I thought to exaggerate I might actually hit it on the head).  I was listening to this while the last Detroit vs. Yankees game was on last night.  “Detroit State of Mind” came on and destiny was sealed.  Elmatic may never be the classic that Illmatic is (it can’t be – it relies on that to exist), but it is a nice fresh approach and much more than a hot mixtape (not to undermine the worth of a hot mixtape). Illmatic in Detroit – plain and simple and great.
(Bonus: Hear it here.)
[Reviewer: Rick]
Matahari Never The Same 7″ 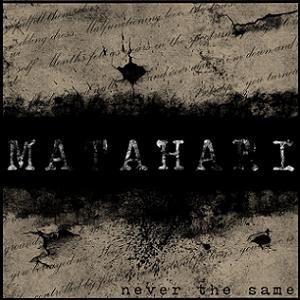 (Get Young)
Get Young Records, CT’s transplanted gift to Boston, brings us an EP by Matahari entitled, “Never The Same.” It takes real balls to invest a few grand out of your own pocket to help propel someone else’s band forward. And with releases this year by Cold Snap, Heavy Breath, and Canvas it goes without saying that Rich & co. deserve your respect and attention. I haven’t heard Matahari before this and the bio I read online has them pegged for fans of Converge and Trap Them, but I don’t hear that at all. Converge gets tagged on to so many band descriptions and pretty much no one ever sounds like them, except The Secret. They would certainly fit in well with the left-of-center hardcore scene of the early 2000s. With an intricate guitar vibe and zero dance parts Matahari bares more of a resemblance to bands just over the post-hardcore lines like Draw Blood, Defeater or maybe even some of the non-mosh Botch stuff.
[Reviewer: Josh]
Primus Green Naugahyde LP/CD 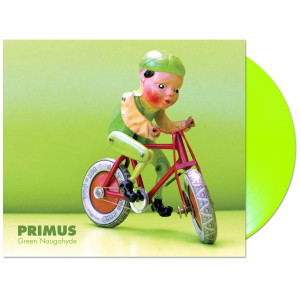 (ATO Records / Prawn Song)
Primus is one of those bands that’s truly inimitable; anyone trying to clone Les Claypool’s signature style, including songwriting, vocalizations and sense of wit, should expect to be labeled an obvious rip-off. He’s played in several bands since 1999’s Antipop, but Green Naugahyde is a true return to a form Primus has become known for (think the driving-tempo sound of Frizzle Fry and Tales From The Punchbowl, with additional ideas from Sailing The Seas Of Cheese.) Although it’s impossible to really “expect” anything from a band as insane as they are, they deliver what a typical Primus fan would look forward to: drug-injected funk-metal riffs, bizarre lyrics and, of course, lots and lots of ultra-dense, cool-sounding slap bass. Unlike the moshpit-ready jams of Antipop (they didn’t want to sound out-of-place at the Family Values Tour, after all,) the tracks on Green Naugahyde concentrate on head-bobbing funkiness (“Tragedy’s A’Comin’” and “Lee Van Cleef” are great examples of that uninhibited, deep-fried-in-cartoony-bass goodness.) Although Primus appear to have a pretty light-hearted demeanor, they have a strong grip on communicating dead-serious subjects such as our consumerist culture (“Eternal Consumption Engine”) and lamenting a friend doomed by drug abuse (“Jilly’s On Smack.”) All in all, this is strong addition to their discography, successfully maintaining their fun, uniqueness, and total insanity.
[Reviewer: Mark]
(*Note: This Primus got back-ordered on us and we’re still waiting on its arrival.*)