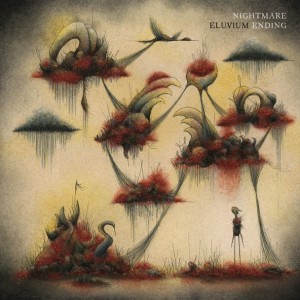 (Temporary Residence Ltd.)
I was impressed when I heard Matthew Cooper’s somber score for the film “Some Days Are Better Than Others” back in June 2011, so I rightfully expected the same sort of introspective ambience on his seventh full-length as Eluvium. This double-album turned out to be a perfect fit as I drove through a lightly falling blanket of snow: meticulously crafted arrangements of piano, strings and various electronic drones create an incredibly rich, full and well-produced ambient sound. My favorites include piano-based songs such as “Don’t Get Any Closer” (which sounds like it’s actually suggesting the opposite) and the friendly, melodic “Caroling;” on the second disc, I particularly liked the grand room-filling “Chime” and, in probably my favorite, the richly flowing 80s-synth tapestry of “Covered In Writing.” Relaxing closer “Happiness” surprises with the album’s only vocals: Ira Kaplan from Yo La Tengo provides some delicately delivered lyrics before the music transitions into with what sounds like a church organ, radiating into drone and piano.
[Reviewer: Mark]