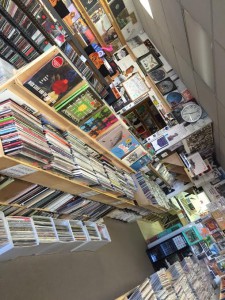 This up-and-coming Norwalk, CT band has an energetic, gritty alt-rock sound inspired by Led Zeppelin and Foo Fighters (it reminds me of Soundgarden as well.) For the ultimate “raw” sound, Crown Colony chose to record this debut EP entirely live in the studio without any added enhancements or special effects. As easy highlight track is the first single “Whir,” themed around a harmful relationship with a punch-packing chorus that asks “do I really wanna love you?” The Fraternal EP is available now on CD, and Crown Colony hopes to release a vinyl album in the future (as well as tour the Northeast.)

Just as the title suggests, here’s a record where country/rockabilly musician Deke Dickerson somehow achieving the oxymoron of singing to classic instrumental songs covered by Nashville’s Mexican-wrestling-mask-wearing surf rock band Los Straitjackets. This was made possible by tracking down lost original lyrics, making up new ones or even other means. “Apache,” for example, started off as an instrumental rock song by The Shadows in 1960, then got covered by the Incredible Bongo Band in 1973, which then got sampled by The Sugarhill Gang in 1981: thus, the cover on this record incorporates not only new lyrics but some of The Sugarhill Gang’s (especially the essential “jump on it!” part.)

Hey! Did you know that Sunday is International Friendship Day? Our calendar told us. Did you know that we have been buying collections of used records like mad lately? We still are. We are running low on room and we have back stock of a bunch of our label releases that we’d like to give away to our friends/customers to make room. So, come in THIS WEEKEND, Saturday and Sunday, and every purchase gets a bonus Redscroll label release! 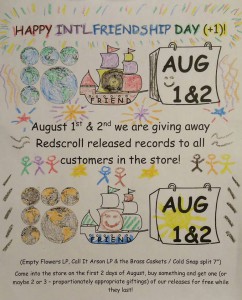