Hey! Remember when we announced our sale a couple days ago and mentioned that you should keep an eye out for future events we’re doing to celebrate 10 years? Well, here’s one of them! 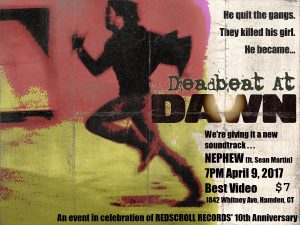 Who is Nephew?
Matt Grem – short answer. He’s been in bands and stuff that don’t really relate to this project. He loves horror movies and their soundtracks. John Carpenter’s nephew (#AltFact).  If you dig really hard into our Instagram you can find some short clips of him playing in clandestine locations.
Here’s a picture of his bedroom (really):

Who needs a bedroom when you've got all these toys?

Joining Matt/Nephew for this venture will be Sean Martin. Sean is generally known for having been in Hatebreed with more recent stints in Jet Fueled Horses and Twitching Tongues among other appearances.  He’ll be joining in on for those key moments begging for a guitar riff.

Deadbeat at Dawn is a low-budget film written and directed by Jim Van Bebber and starring Paul Harper, Megan Murphy, and Marc Pitman. The film depicts a street gang leader setting out for revenge against a rival street gang. (From the Wiki)

Suggested age of over 17 for this one please. The movie contains a good amount of violence and brief nudity.  The original soundtrack is also one we think can be improved and to that end… this event!

RSVP at the Facebook Event here (if we get enough of a response we may do tickets, but until then it is a non-ticketed event).