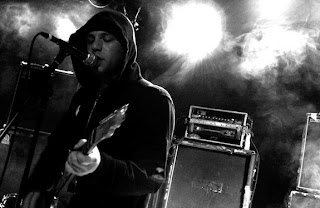 Meet at Redscroll Records (for SECRET LOCATION)
24 North Colony Road
Wallingford, CT 06492
||Facebook Event Page||
Blank Dogs
Mike Sniper (aka Blank Dogs) never meant to be one of Brooklyn’s ‘most mysterious musicians’. Things just ended up that way, as the singer/multi-instrumentali
st released a steady stream of limited singles and EPs on such reputable indie labels as Sacred Bones, HoZac and Woodsist. Not to mention’s Sniper’s own Captured Tracks imprint—a carefully-curated roster that’s grown as quickly as Blank Dogs itself, thanks to such… buzz-stirring releases as Dum Dum Girls’ debut EP and recent records by Beach Fossils, Wild Nothing and Minks.
Captured Tracks
Mp3s: http://www.myspace.com/blankdogtime

The Soft Moon
Raised under the burning sun of the Mojave desert, Vasquez channels both his punk upbringing and Afro-Cuban heritage to sculpt decidedly dystopian soundscapes for a new generation of torn romantics. It’s a record set somewhere in the near post-apocalypse where technology enchants as much as it destroys.
Captured Tracks
Mp3s: http://www.myspace.com/thesoftmoon

Apse
Apse (pronounced /‘apps/) is a cadre of ghosts wailing into the cold New England wind. In recent years the group has channeled itself through ATP Recordings, reaching a larger audience so all can immerse themselves in its dark realms. Its sounds are heard on the tribal atmospheric swamp of Spirit, the drug-addled lo-fi montage Eras, or recently on Climb Up’s more rousing gesture toward the light. The group’s live performances – often known for their unmistakable dark intensity and shamanic conjurings – are not to be missed.
Mp3s: http://apsecraft.tumblr.com/

I’m personally psyched on this show.  I’m excited to see Apse for the first time in a while with their latest line-up and new songs.  I’m pretty stoked on The Soft Moon album so getting to see them right now is perfect.  And Blank Dogs too!  Psyched. – Rick