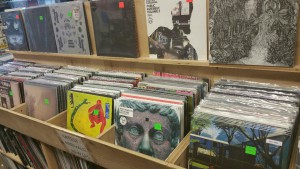 (Dust-to-Digital)
This CD serves as the soundtrack to John Pirozzi’s documentary of the same name, compiling a variety of songs from Cambodia’s fledgling rock scene from the 1950s to 70s. It’s fascinating to hear how artists simultaneously drew from Western influence and incorporated elements from their own culture. Acts included range from singers such as crooner Sinn Sisamouth and the warm-voiced Huoy Meas to rock bands with a talent for surf (Baksey Cham Krong) as well as a hard psychedelic sound (Drakkar). These Cambodians’ influential music careers would come to an abrupt and tragic end in 1975, of course, when the nation’s capital Phnom Penh fell to the Khmer Rouge, who were determined to eliminate all Western influence. The CD’s booklet provides biographies of the artists featured: some were lucky enough to survive by covering up their past, while others are only known to have died during the years of genocide. With so much talent present on these surviving songs, one can only wonder what the future would have held if their country had avoided the grasp of evil.
[Reviewer: Mark]