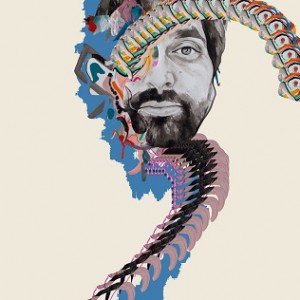 (Domino)
This Baltimore band’s latest album is a tirelessly vibrant, kinetic barrage of modular synthesizer-powered psychedelic pop, cutting right to the chase without any drawn-out passages. Animal Collective have also dropped the reverb effect from the vocals, focusing on the unique (and probably fun) challenge of keeping in time with the high-energy percussion. Opening track “FloriDada” is a great way to set the mood, with dizzying, high-speed psychedelic sunshine that conjures up Beach Boys vibes (when I saw Animal Collective perform it live a few weeks ago, the crowd couldn’t stop moving to it.)
[Reviewer: Mark] 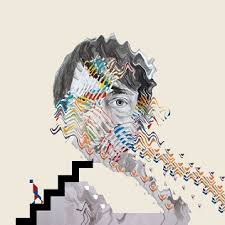 The psychedelic genre bending alchemists return with a bubbly new adventure entitled Painting With. A return from their cold, sterile studio heavy direction they took with their last album Centipede Hz, Animal Collective are back making sunny pop songs but with their brand of extreme weirdness intact. This album is very much a cousin to their breakthrough album, Merriweather Post Pavilion, and dare I say it… even poppier (don’t be alarmed!), with tighter song structures and more colorful noises. If I had to describe the sound, I would bizarrely describe it as the Beach Boys mashed through a Sega Genesis for some 16-bit psychedelic goodness.

Animal Collective are a band that takes pride in change. And by change I mean extreme change. From their freak folk days of yore to their more recent electronic dabbled work, each album is a snapshot of a particular time and place. I have seen them perform five times throughout the years and each concert was a unique experience. I even got to see them play at Merriweather Post Pavilion (a venue in Maryland that they named their 2009 album after) for their first time. Most recently, I saw them play at Irving Plaza in New York and they were once again an experience like no other; a force of tribal nature accompanied by enthralling harmonies and electronic doodads. Now a three piece band plus a touring drummer (guitarist Deacon sat this album out), they played two hours of extended jams and hypnotic mind melting soundscapes. Touring behind their new album, naturally most of the night’s set revolved around songs from Painting With, with a couple of deeper treasure tracks tossed in from their back catalogue of almost twenty (!) year long career.

My favorite parts were the transitions between songs and how the band would erupt into starry swirls of noise before returning to Earth to segue back into the next song. The night’s set had a couple of awesome surprises, especially “Daily Routine,” a cut from Merriweather. Its swirling beats and washed out vocals got the biggest reaction of the night, sending people into a dance frenzy overdrive once the band settled into its groove. A cool part of this tour is that they are playing their new songs for the first time live. Usually before going into the studio to record their tracks, the band would road test their songs on the live circuit to audiences and tweak them every show like mad scientists until they are satisfied enough to tape them for an album. This tour they are reversing the process with their new songs fully realized for audiences. Remarking on this change in practice, band member Avey Tare said that:
“For this album, our challenge was to show up with nothing and write together through jamming. We thought it would be cool to do it this way because we’ve never really done it before and because it worked out in terms of what each of us had going on in our lives. We couldn’t just jump back on the road, so we felt this would be a less stressful way to get things done.”
All in all, it was a great night but no “My Girls”? Whaaaaa