Spotlight: Female
Female is a  musical project based in New Haven, CT. The project is the baby of Michael Donahue. It is dark pop easily relate-able to the recent resurgence of interest in the minimal wave sound (though as you’ll read below Female would not like to be painted into that corner). Female has played a good amount of shows (like this one we did last year with Iceage) and I can tell you that while all enjoyable they are never predictable; not to say that you won’t have some idea from listening to the music, but more that you don’t know exactly which direction it will take that given night. With a wealth of material readily available for anyone with an internet connection and a set of speakers to listen to Female shows no signs of slowing down (many links to follow). I’ve (Rick) done a concise interview with Michael (videos and links aplenty within it). 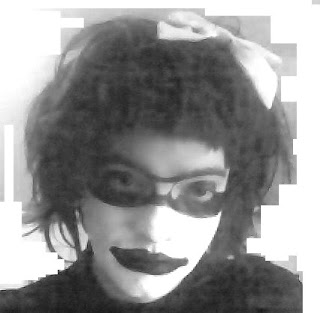 [begin interview/]
Rick: Let’s give a quick introduction to the uninitiated about Female. Generally, when asked, I tell people it’s an adventurous minimal wave project. What do you tell people before they even hear your music?
MD:  I usually just tell people that i make pop music; although I tend to veer off into some other territory, at the core my songs follow classic pop structures. Melody, the hook, the buildup, and the release. In my opinion, the recent re-discovery of minimal wave and NDW, albeit exciting, has limited potential for growth. Sometimes i can even pigeon hole myself worrying about these labels. I used to think that production quality somehow influenced genre, but no longer. Pop is pop. Just look at R. Stevie. 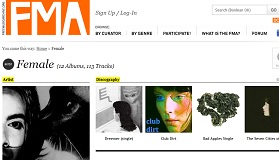 Rick: You’ve got a lot of output and most of it can be found at http://freemusicarchive.org/music/Female/. Is Female your only musical outlet? If there are others could you give a brief explanation of each. Do you see the output of Female slowing down (for other projects or any other reason at all)?
MD: I currently make music under Female, Milk Collection, the Wolfs, and Moon Bath. Milk Collection is a vehicle is use for less structured sounds, heavily influenced by an obsession with horror soundtracks. It began as a tribute project to the black metal duo Aghast. The Wolfs is a solo punk project where most of the songs are about staying up too late. There’s a li’l five tracker coming out in March. Moon Bath, is a project made up of myself and Allison Kern from the band 2TonBug. Its mainly a video project. We start with the intention of making music, but then usually end up doing glamorous photo-shoots and making music videos. She directed and edited the “Dreemer” video and we have a second video (for “Time Erasur”) coming out soon [editor note: embedded below!].  As for Female, I see no slowing down. Its my baby.
Video for Female “Time Erasur”
Rick: Female has limited output on physical media – could you give a physical discography? With free releases and physical releases do you find yourself having a different approach to their releases? Do you have more of a filtering process to see what might make the cut on a physical format?  And do you have any plans or desire to release more physical music?
MD: For Female releases the physical ones were put out on a little label I had called Filth Forever. First was “Worms”, which was mostly tape collage with short vignettes about boredom. After that I put out a more song based album called “Frozn Infent.” Both were editions of 30 with the bulk of them given away to close friends. The next two; “Trash Queen” and “Mold Donor” were the first two I started selling at shows. After those were all gone I put them up on the FMA. There’s a collab tape with Supernaturelle (now Beeman Glow) floating around out there too. (I think there’s some copies left at Feeding Tube). Other than those, the rest of my albums are for free. The main reason I do this is for financial restraints. Putting out tapes or records yourself is insanely expensive and time consuming. And although I’m very particular about the production quality of my albums, I’m not at all an audiophile, and I see no problem with mp3 downloads as a means to get my music out there.

Secondly, I hate the whole “send in the demo, wait around with fingers crossed, hope someone gives a shit” routine. Its not that im against physical formats, I just think that artists tend to rely on them too much, as some sort of strange vindication. I would love to have records out for people to buy, but I feel the demo submission process can be a bit demeaning. Don’t get me wrong, independent labels are the saviours of music, I just think that artists shouldn’t rely so much on their acceptance. Lastly, I love the internet. With sites like the FMA its a great way to not only get your music out there, but also to get radio play on WFMU (best station ever [editor note: I wholeheartedly do not disagree with this.]), and connect with other artists.

As far as what makes it to a physical release vs. a free download, there’s no difference for me. Whether or not the music is on a physical format should have no bearing on the quality. Some artists make that distinction and i think its not fair to the listener, due to the idea that in order the hear “the good stuff’, you have to pay for it. 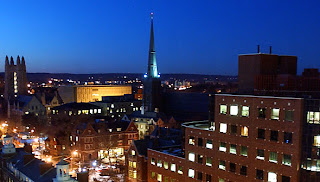 Rick: Describe how your physical environment (New Haven, your personal space, your day-to-day/night-to-night) effects your musical output in brief? Do you find yourself ever having an agenda with your music or do you find it just to be a release (or something in the middle)?
MD: My environment has everything to do with the music. I love New Haven with all my heart. Seeing the super poor right next to the super rich can be depressing at times, but it can also do a lot for creativity. Living here has really taught me that no matter what your bracket, we all have an obsession with technology. Everyone wants to be glamorous, or at least appear to be. The nightlife here is really bizarre, which is great for me because i usually sleep during the day and am up all night. Everything closes relatively early, so things get weird after 11. My living space also has a lot to do with how I write music. I live in a very small room in this big wierd old house thats very dimly lit and almost always a mess, and I think my music reflects that vibe. Its easy to hide in my cave and work.
My music definitely has an agenda, but not outwardly. The aesthetic is very apparent, but i try to keep any meaning to myself. Most of my songs are about reptilians, technology, and gender, but i dont want to alienate any of my listeners. I’m not trying to persuade anyone to follow my beliefs about these topics, and thats why I’ve never included lyrics in any of my releases. Its not that I’m trying to be secretive or mysterious. If someone where to approach me asking what a song was about, I would gladly tell them. I just think that too often the message can get in the way of truly enjoying the music. With that said, every album I make does have a specific vibe throughout. I’ve always been obsessed with the idea of “the album” as one complete package. I dont want people to hear my tracks out of context. I know that’s pretty idealistic, but I make all my songs with continuity and flow in mind.
[/end interview]